When it comes to describing Mauritius, we’re going to leave you in the inspirational hands of American writer Mark Twain: “From one citizen you gather the idea that Mauritius was made first and then heaven; and heaven was copied after Mauritius."

‘Nirvana’s blueprint’ is a nickname that Mauritius utterly deserves, with miles and miles of palm-speckled sugar-white sands lapped by limpid-blue sea. It’s a tropical scene fitting for any luxury holiday and a superb selection of resorts, including some of the best family-friendly hotels in the Indian Ocean, match the five-star views.

While its beaches and snorkel-worthy waters are certainly beautiful, Mauritius’ interior further confirms the heavenly appraisal by the proud local Twain wrote about. An emerald oasis of lush jungle, waterfalls and soaring mountains make for an adventurers’ playground, with hiking trails providing prime access. Rum distilleries, colonial plantations and the capital of Port Louis offer a delightful insight into the island’s melting pot of cultures – once ruled by the Dutch, British and French and now populated by Africans, Indians, Europeans and Chinese, Mauritius has layer upon layer of heritage and traditions.

A holiday to Mauritius has a bit of everything – adventure, history, unbelievable underwater worlds and brilliant beaches. And that’s why it was once called a prototype for paradise. 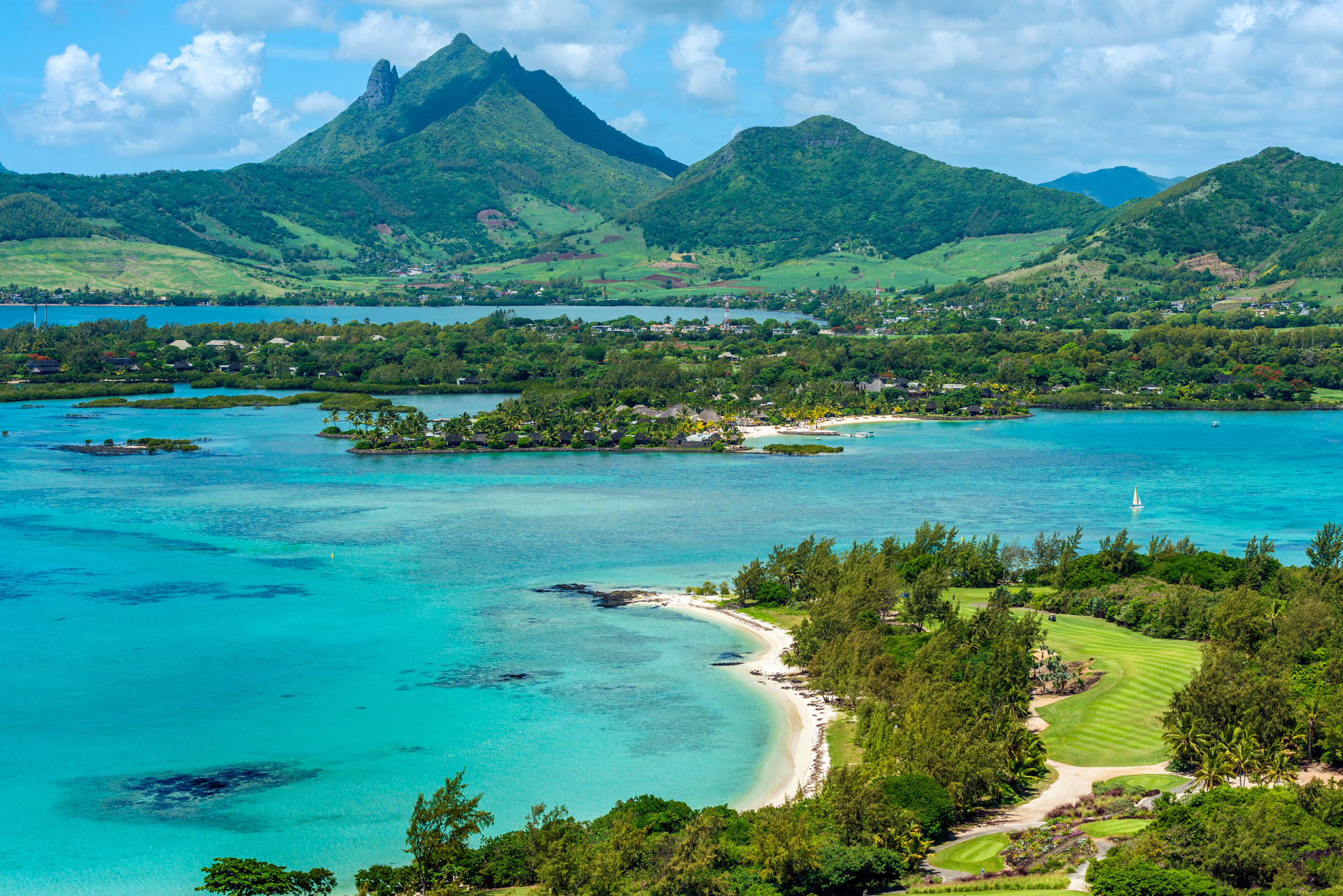 With pristine beaches skirting the whole of Mauritius, the powder-soft sands only interrupted by the swaying shadow of an occasional palm tree, it’s hard not to have a romance-fuelled holiday on this dreamy island. Five-star honeymoon resorts give you prime access to this slice of paradise, with options like a candlelit beach dinner or private in-villa dining only serving to ramp up the romance. Aside from the romance on tap for couples, Mauritius’ beautiful beaches are backed by emerald-swathed mountains seeping with waterfalls – a scene that is guaranteed to make your heart soar.

Family spirit is something that’s embedded in Mauritian hospitality and they love to share it with every visiting family. Here, hotels just love to help take the pressure off families, allowing you to completely relax and enjoy quality time with your loved ones. Most family resorts in Mauritius have interconnecting rooms and spacious suites, making them ideal for those with young children, and you have the pick of some of the best kids’ clubs across the Indian Ocean. There’s no end to the activities they can offer, from cookery schools to water sports lessons, a golf academy to a dedicated day care for your really little ones.

It goes without saying, beach time in Mauritius is brilliant but there’s plenty of opportunities to stretch your legs. Several resorts have tennis courts, while a range of water sports are often complimentary, including sea kayaking, jet-skiing and more. For something a little more leisurely, a Mauritius holiday offers that, too. A helicopter tour offers an epic birds-eye view of the entire emerald isle, while back on water a cruise of the islands off the north coast puts you in touch with vibrant birdlife, sweet spots for snorkelling and more relaxing beach time.

Play a round of golf (or two)

Hiding among the leafy interior of Mauritius is a fine collection of golf courses, ranging from world-class 18-hole courses to scenic nine-holers. Better still, many of the hotels which boast their own golf course will offer you complimentary access throughout your stay, with courses at One&Only Le Saint Geran, Constance Belle Mare Plage and Heritage Le Telfair among our favourites.

If you want the complete story of Mauritius, then make sure you venture inland. You can hike through the island’s lush interior, including through the rolling hills of Black River Gorges National Park, atop the dormant volcano of Trou aux Cerfs or to the waterfalls of Chamarel and Exil. Mountain bike trails also vein the rich swathe of rainforest, while a 4x4 drive takes you past fruit plantations and villages, offering an authentic glimpse into local life where you can observe artisans at work and try traditional dishes such as gato pima (pea fritters). Other highlights include Pamplemousses Botanical Garden, a fascinating collection of plants that date back to French colonial rule, and the buzzing market of Mahebourg.

Where to stay in Mauritius

Mauritius has two main seasons, with its summer from November to April and the winter occurring from May to October. The island is a year-round destination, with both seasons having their advantages. Deciding on the best time of year to visit Mauritius depends on what you’re looking for from your holiday.

The peak summer season is hot and humid, with temperatures (especially on the coast) rising above 30°C. During Mauritius’ summer, there’s a chance of rainfall, although it usually comes in the form of short and sharp afternoon showers. These never last for long and actually help in clearing the humidity, before drying up pretty quickly. January and February can occasionally see cyclones but thanks to the country’s tiny size, they generally miss Mauritius. Having said that, January and February offer the best visibility for divers, though it’s great throughout the year.

Mauritius’ winter is a lot cooler, with temperatures ranging from the mid to low-20s (degrees Celsius), and a lot drier. Warm, sunny days are aplenty, although you might need to pack an extra layer for the evenings. July and August is popular with families because of the school holidays and plethora of great family-friendly hotels. In September and October it’s still generally dry and the temperature starts to heat up in anticipation of the summer season, making this one of the best times to go to Mauritius on a luxury holiday.

Do I need any vaccinations for Mauritius?

No vaccinations are currently recommended for Mauritius. If you’re entering Mauritius from a Yellow Fever zone, possession of a valid Yellow Fever inoculation certificate is required. For any current travel health advice, you should seek guidance from your GP at least four to six weeks prior to travel.

What is the time difference between Mauritius and the UK?

The time difference is GMT +4 hours.

How long is the flight to Mauritius?

The direct flight time from London to Mauritius is 12 hours.

What is the currency in Mauritius?

The currency is the Mauritian rupee, although Euros, dollars and credit cards are all widely accepted.

Do I need visa for a holiday in Mauritius? Mauritius inspiration
CANVAS
Head to our blog CANVAS for more inspiration, insider secrets and diaries from our team on Mauritius.
Head to CANVAS
Luxury Holiday Offers