The bear lodges of British Columbia offer visitors the utterly unique and entirely spellbinding opportunity to observe grizzly and black bears in their natural habitat. The British Columbia coastline is one of the longest in the world and, indeed, the only coastline which is less inhabited now than it was 100 years ago. It’s hard to contextualise the vastness of this wilderness, spreading thousands of miles inland, providing a virtually impenetrable habitat in which the bears and wildlife of western Canada exist. Not dissimilar to remote African safari lodges or floating jungle camps in Asia, bear lodges in British Columbia are seasonal operations, most opening from May to October. Exact dates change year to year, lodge to lodge, in line with the behaviour of the bears and the annual salmon run, on which their habitual patterns rely. Like all unique accommodation experiences, it's important to choose the right lodge for you. We have hand-picked a selection of our favourite lodges, run by people who have dedicated their lives and careers to preserving the environment, at the same time providing exceptional wilderness experiences.

It’s important to remember the grizzly bears in particular are active in different parts of the Great Bear Rainforest at different times of year, and although they quite rightly are the first thing to catch our attention, we cannot ignore the incredible marine life who, like the bears, follow the natural wonder of the salmon run each year. Between May and October, humpback whales travel from Hawaii and the Americas all the way up to Alaska to feed, filtering through the Inside Passage which hugs the coastline  between mainland British Columbia and Vancouver Island. Orca are also resident here, although sadly numbers have been declining over recent years as salmon numbers have dwindled and commercial fishing lanes have moved closer to the coast. However, there are still a healthy number of both resident and transient whales who live and feed around the northern end of Vancouver Island, towards the inlets of the Great Bear Rainforest, where these fabulous floating and land-based lodges are hidden.

As with all wilderness and wildlife experiences, nothing can be guaranteed with nature. However, it is hugely unlikely that you won't see any bears during your stay. Depending on which lodge you choose, you are also likely to see whales, too.

Will I see black and grizzly bears?

Despite being distant cousins, black and grizzly bears are not the best of friends. Although they live in close proximity, generally speaking if there is a grizzly around, you are unlikely to see a black bear. Black bears are also a lot more skittish and therefore if you're lucky enough to come across one, they may not stay around for long! With this in mind, it's important to remember that in comparison to the estimated 15,000 grizzly bears living in British Columbia, there are between 120,000-160,000 black bears – so you are much more likely to spot a black bear on your journey in other areas of the province.

Will the bears be fishing for salmon?

Between May and the end of July/early August, the grizzly bears will be feeding on sedge in the estuaries. You will most likely view the bears by boat, as they will be close to the water's edge. When the salmon runs start (which can be anytime in August or September), the bears move up the rivers to start fishing. It is impossible to predict when this might happen, but the safest time to visit if you'd prefer to view bears in the rivers is in September and October. Viewing at this time of year is mostly from elevated platforms that you walk or drive to each day.

On arrival at your bear lodge, you will be given a full induction on bear safety and certain rules you must abide by while you're in the Great Bear Rainforest. A few important 'bear aware' rules you should stick to throughout your trip in British Columbia and Alberta are as follows:

1) If you are out hiking in bear country, be sure to make noise as you go. Bears are definitely more scared of humans than we are of them, but it's never good to surprise a bear. If they can hear you coming they will get out of the way.

2) Carry bear spray or a horn. If you are heading to a remote spot, it's always a good idea to pack some form of deterrent - just in case. Bear attacks are almost non-existent so you mustn't let bears put you off exploring, it's just worthwhile to be prepared.

3) Food and scents are attractive to bears looking for food. This rule is only really applicable when you are camping or bear viewing. The lodges will ask you not to wear anything too fragrant and to always keep food in the boat/in an air-tight bag. It's less about the bears being dangerous and more about ensuring they do not get used to human scents and food in the wild. 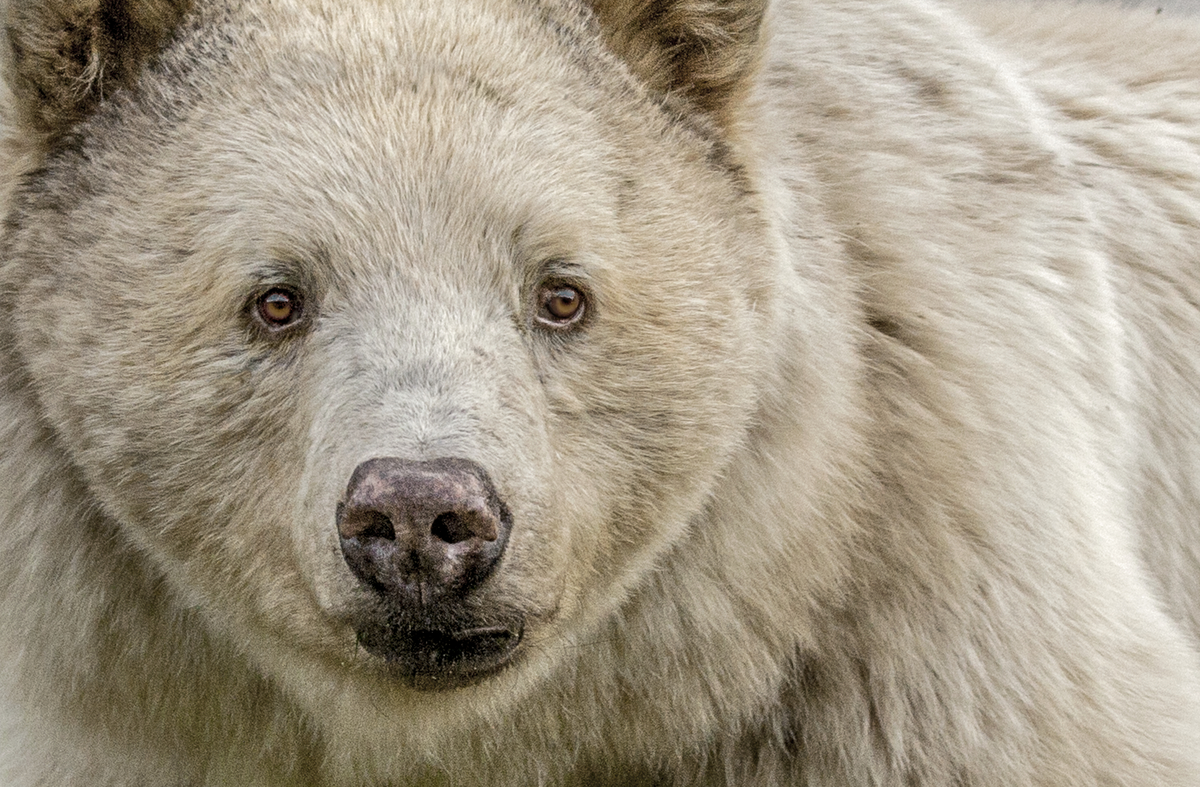 Kermode (Spirit) bears
The bear of British Columbia
Spirit Bears are white North American black bears and only found in the northern part of British Columbia's Great Bear Rainforest. Sadly, it's thought there are now less than 400 of them left in the wild. These bears are sacred to the indigenous First Nations people and can only be seen by visiting remote lodges. Speak to a Turquoise expert for more information.
Meet the team