Turquoise’s top things to do in Cape Town

Turquoise’s top things to do in Cape Town

Until you’ve been, you can’t truly comprehend how stunning Cape Town really is. Before I visited, plenty of my friends’ eyes lit up at the very mention of its name when they tried to explain Cape Town’s good looks to me. I felt I knew what to expect but nothing could really prepare me for the city’s natural beauty. Leafy boulevards crisscross the city centre, a cool urban vibe emanates from its buzzing waterfront and white, sandy beaches are just a few minutes away by car. It’s the natural glory that surrounds Cape Town that has you in a permanent state of awe, though, with the sparkling ocean on one side and imposing peak of Table Mountain on the other – the city’s undisputed iconic crown. You could just stand in one spot all day out of sheer admiration of Cape Town’s splendour, but there’s so much to see and do in this charismatic city. Here are some of my favourites…

Just the name Robben Island makes you think Nelson Mandela. He was imprisoned here for 18 years and Robben Island, which lies just off the coast of Cape Town, was built to house those who spoke out against apartheid and silence them. Instead, it became known around the world as a key location in South Africa’s fight for liberation. 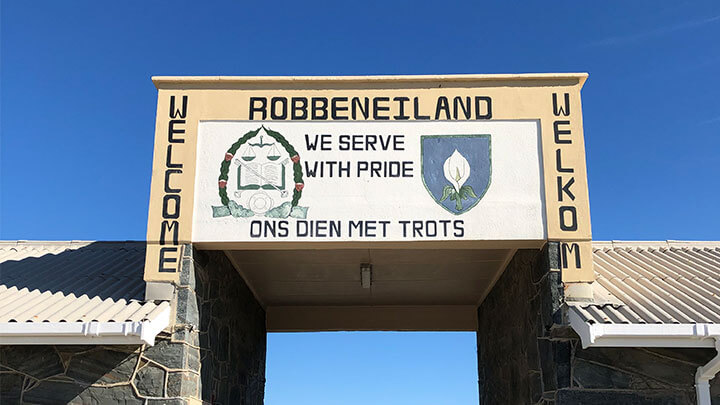 Regular tours now visit the island from Cape Town’s waterfront, which give you a rich and detailed insight into the history of apartheid and the experience of the political prisoners on the island. You are taken to the quarry where prisoners were subjected to hard labour during the day and through the prison complex, where you’ll see Mandela’s cell, among other areas. Every tour is led by a former inmate of Robben Island, so you’re guaranteed to get a harrowing but fascinating first-hand account of their time there. 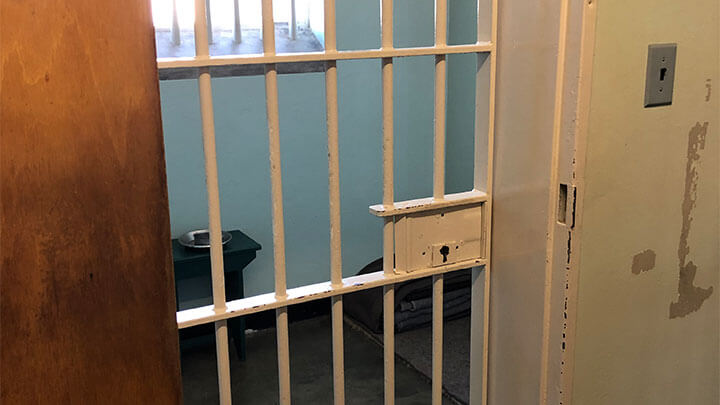 Cape Town’s towering icon, the lording presence of Table Mountain is inescapable no matter where you are in the city. Yes, it’s a spellbinding sight to see from ground level but you really need to climb it – either on foot or in the cable car – to both appreciate its magnificence and witness eye-popping panoramas of Cape Town from its summit.

When I was there, my wife and I climbed up Table Mountain via the India Venster route, which took around three-and-a-half hours. It’s often seen as one of the best routes, its occasional rock scrambling and climbing adding a thrilling slice of adventure to the hike. When you dare to look back at your ascent, you’re rewarded with epic views of the city. We are novices when it comes to climbing but we found the scrambling parts of the route (which only represent around 10% of the route) fairly simple, although I’d recommend going with a guide, as you learn so much along the way. 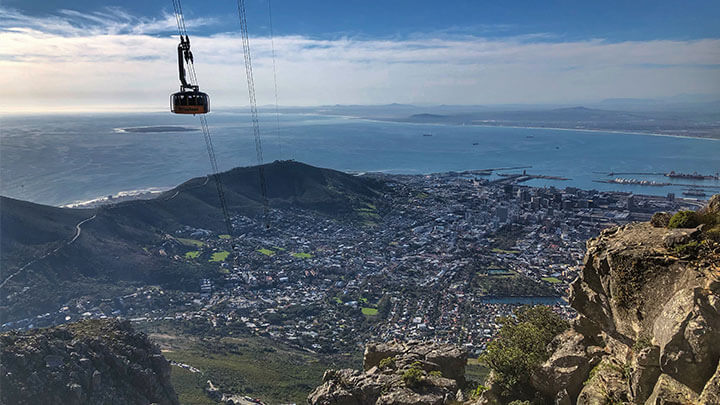 If you want a more straightforward route, Platteklip Gorge is the most popular and accessible, a rocky path of switchbacks and steps. Though it’s not very technical, it’s still not a ‘quick’ route up the mountain and takes around three hours. If you do decide to hike, whichever route you take, please ensure you have appropriate walking shoes and plenty of water!

You can take the cable car down if you’re doing the hard work on the way up or, if you’re pushed for time, get the cable car both ways! There’s a pleasant circular route at the top which you can wander, or you can just admire Cape Town’s heavenly views from the top table. 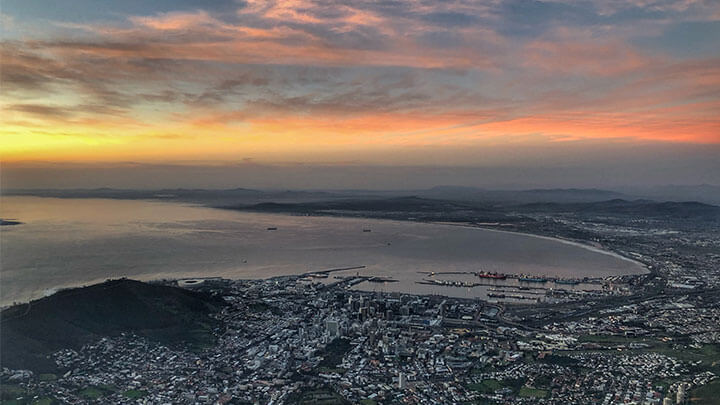 Probably one of the most-photographed spots in Cape Town and an Instagram favourite, the vibrantly painted houses of the Bo-Kaap (which means ‘above the cape’) neighbourhood are as fascinating as they are colourful. That doesn’t mean you’re not going to be tempted to take pictures of its rainbow-hued buildings. Red, yellow, pink, blue, green – anything goes in the Bo-Kaap! Originally known as the Malay Quarter, the Bo-Kaap was established as a neighbourhood where slaves (most of which weren’t Malaysian) by the Dutch in the 17th and 18th centuries lived. Now, it’s home to a thriving Muslim population and the call to prayer and waft of spices only add to the charming atmosphere the bright buildings emanate. I’d recommend going on a guided tour of the Bo-Kaap, as a local will add colour (pardon the pun) to this interesting corner of Cape Town. You’ll even be invited into a local’s home, to learn about their personal experiences living in the district and taste some of the Bo-Kaap’s tasty delicacies, including special flavours of rooibos tea and koeksisters (syrup-covered doughnuts). 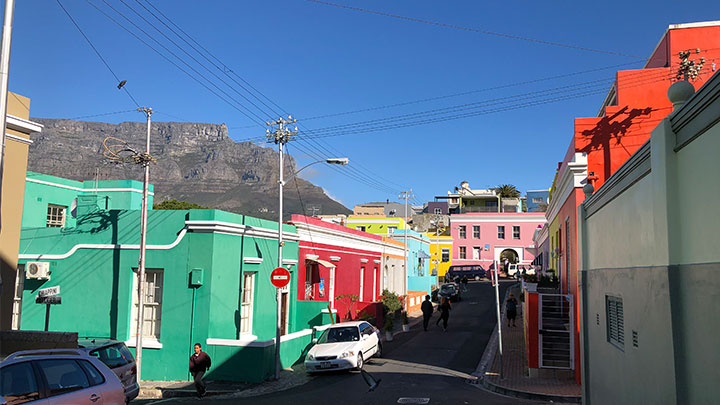 Go there and get the classic Instagram snap, but linger a little longer to get under the skin of what, in my opinion, is one of the most absorbing parts of Cape Town’s story.

A tour of the Cape Peninsula

If you want to widen your horizons and explore outside of the city, then I’d highly recommend exploring the Cape Peninsula. A full-day guided tour is the ideal way to get the most out of an area where there’s plenty to see, with all your tickets and park entry fees included. You’ll start in spectacular fashion, with your driver guide taking you along Chapman’s Peak Drive, which is often named one of the world’s most scenic driving routes. It hugs the Cape’s dramatic rocky coastline from Hout Bay to Noordhoek and there’s plenty of viewpoints along the way to stop and soak up the mesmerising views of the bay below.

Your next stop is Cape Point, the tip of the finger-like Cape Peninsula and a rocky headland that serves up epic views of the coast. Climb to the top to the lighthouse for the best view of what truly feels like the end of the Earth. As you make the short drive to the famous sign at the Cape of Good Hope, keep an eye out for a fascinating array of wildlife you can spot among the shrubland, including baboons, elands and ostriches.

Your last pitstop before lunch is at Boulders Beach – the highlight for many people, thanks to its 3,000-strong colony of African penguins. A boardwalk takes you right up close to them and you could easily stay there for hours watching them bask in the sunshine or playfully swim among the waves. It’s hard to believe they weren’t even there 40 years ago, the colony sprouting from just two breeding pairs in 1982.

After lunch on the beach, your final stop of the day is the incredible Kirstenbosch National Botanical Garden. It’s renowned for the amazing diversity of Cape flora it has on display, including fynbos vegetation, which is endemic to the Cape. As you wander its different flora zones, you’ll be awestruck by the magnificence of its setting, lying on the eastern slopes of Table Mountain and with the peak a grand presence looming over the garden. Among its many sections, make sure you visit the Tree Canopy Walkway (known as the Boomslang) for a panorama of the garden in its entirety and also the avenue of camphor and fig trees, which once served as a main road for wagons heading to Cape Town. 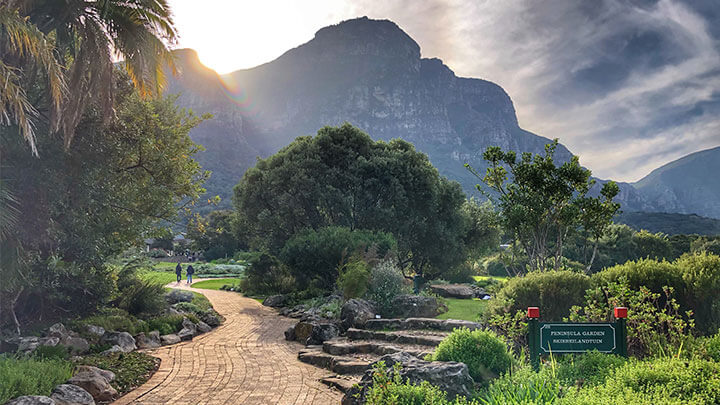 I stayed at Kensington Place, which was the perfect sanctuary lying on the leafy slopes of Table Mountain. It was the ideal quiet retreat in which to escape to after a busy day exploring the city, an elegantly designed hotel whose garden is filled with the citrusy aroma of orange and lemon trees. The staff were always extremely happy to help and offered invaluable advice and service during my time there.

We are so excited to announce the second edition o

Sundays from the sky 💙 @dhigalimaldives