Thanks to the balance of flavours that make its dishes so tasty, both visitors and locals are obsessed with Thai food. It’s a part of everyday life and there’s no better place to start than its capital, Bangkok…

The number five is used a lot in our day-to-day lives. We have five senses, five fingers, five toes and everything we rate is often out of five stars. In Thailand, it’s all about the five flavours – sweet, salty, sour, spicy and herbaceous. No traditional Thai dish is made with less than two of these tempting tastes and every combination is a delicate balancing act.
H2 heading: A bite of passage in Bangkok

It’s this attention to detail that makes every bite of Thai food a tantalising explosion on your tastebuds. Rightly so, it’s a cuisine that has been catapulted into the limelight of the international food scene but there’s nowhere better to savour its fine fare than in the country itself. 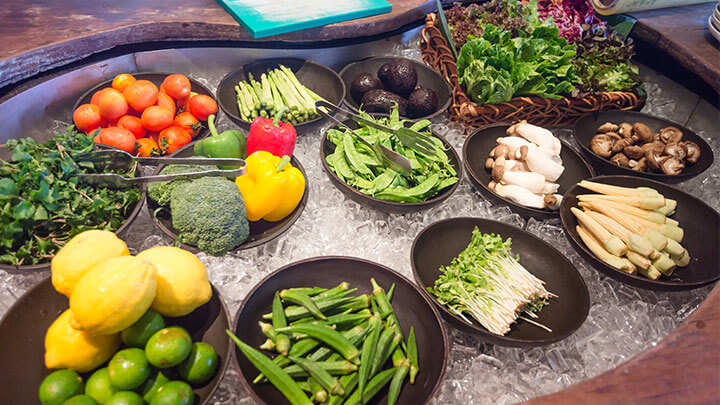 Whether you’re lounging on a pristine beach or wandering the rainforests of Khao Sok National Park, the smells, sounds, tastes and sightings of delicious food are never far away in Thailand. That’s because it’s simply a way of life here, an intrinsic part of Thai culture. “When a guest comes to our house, we will always greet them and ask if they’ve eaten, instead of talking about the weather or other pleasantries,” explains renowned Thai chef Ian Kittichai. “I can easily eat Thai food for breakfast, lunch and dinner and not get tired of it!”

Ian is someone who has grown up surrounded by food, having spent his childhood helping his mum pick ingredients for her food cart before selling street meals in Bangkok. This upbringing fuelled his desire to become a chef and after honing his craft in London and Sydney, he has opened several restaurants around the world. One of them – Issaya Siamese Club – is in his home city of Bangkok. He knows every culinary corner of Thailand’s buzzing capital and with everything from sizzling street food to gourmet dining, he believes there’s nowhere better for an all-encompassing palette of Thai cuisine. “I would recommend going to its markets to explore the ingredients,” advises Ian. “I grew up going to Klong Toey Market but for first-timers I’d recommend going to the smaller, more ‘polished’ market of Aor Tor Kor across from the Chatuchak Weekend Market.” They’re a treasure trove of ingredients that are vital components of Thai cooking – locals watch over heaps of coriander, galangal, shallots, tamarind and much more which line their stalls in exotic displays. 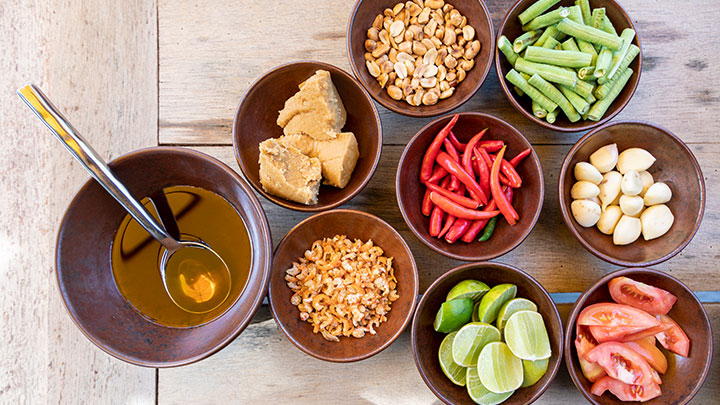 A banquet in Bangkok

However, Bangkok offers much more than its markets. When visiting, make sure you garner a real breadth of its gastronomic scene, from its street food shacks and shophouses to the higher-end Thai fine-dining restaurants that pepper the city. Bangkok represents a microcosm of the country’s culinary delights – one night you could be eating food hailing from the southern province of Nakhon Si Thammarat at Baan Ice and on another you could be transported to the north-eastern countryside of Isaan at Nomjit Gai Yang. Around every corner, the smells of more cornerstone ingredients – garlic, ginger and lemongrass, among others – will dominate your senses. Ian believes Bangkok displays how diverse Thai food really is: “I love the versatility of Thai cuisine and the flavours. There is something very satisfying about having spicy, salty, sweet, sour and herbaceous in one bite.” However, it’s also a good way of seeing how Thai food evolves and how each component is interpreted by up-andcoming chefs in their creations and which dishes are in vogue.
One thing that doesn’t change, however, is that delicate combination of the five flavours. That balance is what makes traditional Thai food so special and so irresistible to us. There are so many different and wonderful dishes to try but to get you started, Ian has suggested one of his own recipes – Yam Nua Yang (grilled beef salad), accompanied by a red seafood dipping sauce.

1. Grill the red bell peppers in the oven until charred on all sides. Put the peppers into a bowl and cover with cling film for five minutes. Peel off the burnt skin and discard.
2. In a blender, combine the roasted peppers and the remaining ingredients until it’s a smooth consistency.
3. Store in the fridge in an airtight container, for up to a week. 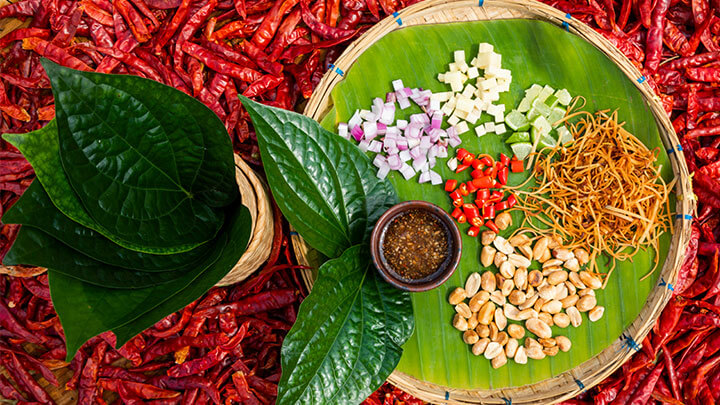 Cuisine and Cookery of Thailand

Island and Beaches of Thailand

Wildlife and Nature of Thailand

Distinctly Thai. Explore Thailand and all it has t

Sundays from the sky 💙 @bawahreserve