Turquoise is proud to sponsor Gorgeous George, a rare Grand Cayman Blue Iguana. These iguanas were nearly made extinct just ten years ago; they’ve been saved by Frederic Burton MBE and we are happy to be doing our part to keep them around these days. 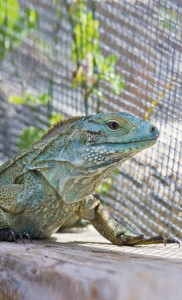 These iguanas, which are sky blue in colour (hence the name) with large red eyes, are found solely on Grand Cayman at present. They can grow up to five feet in length, which is as long as a small woman is tall, and are a prehistoric species that can live as long as humans do. Fred Burton first came across these iguanas when he visited Grand Cayman in 1979 as a young scientist. Returning later in life as the Environmental Programmes director for the Cayman Islands National Trust, he discovered that there were likely to be less than fifteen iguanas live in the wild, so few that they were considered unable to breed and thus functionally extinct. They did not live long enough to make it to the breeding stage of life. Luckily, Mr Burton didn’t stand for it, and set off on a mission to save this rare species from leaving the wild entirely. He recently published a book about his campaign called ‘The Little Blue Book – a short history of the Grand Cayman Blue Iguana’. 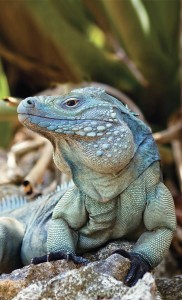 His mission was obviously a success, and now the iguanas live in large numbers around Queen Elizabeth Botanic Park. Gorgeous George is one of these animals. Our sponsorship goes towards his actual care, which in this case is monitoring of the iguanas in the wild and ensuring their numbers are maintained and growing as well as continuing the recovery of the species. The iguana recovery programme is intended to restore these animals to the wild so that they no longer need conservation. Iguanas are bred diversely and raised in captivity to an age at which wild survival is likely, then released into the world to live and breed freely. Two wild ‘subpopulations’ have been restored already. The process must be carefully done, as genetic similarities could lead to a weakening of the species overall, so part of the goal is to maintain diversity by breeding from different populations.

Visitors to Grand Cayman can get involved in the conservation programme by joining a guided tour. These Blue Iguana Safaris are available every day but Sunday at 11 am. You can spend one and a half hours walking the Park’s woodland trails with one of two Blue Iguana Wardens, who will tell you all about the programme and lead you through the most interesting areas. The tour is best on the hottest, sunniest days, as that is when the iguanas are most active, so ensure you bring a bottle of water. If you’re heading to Grand Cayman with us, ask about your options for visiting.

We look forward to continuing to update you with information on Gorgeous George and the blue iguanas as and when we receive it!