By Lonely Planet Cambodia guidebook author Nick Ray
Unchained from the shackles of its past, Cambodia is reinventing itself thanks to sophisticated beach escapes, emerging ecotourism hotspots and an experimental cuisine scene

Most visitors are drawn to Cambodia for the iconic temple complex of Angkor Wat and this hasn’t changed much in almost a millennium. Elsewhere in the kingdom, the travel landscape is shifting seismically: the skyline of the capital, Phnom Penh, is on the up, bringing sky bars and designer dining; the south coast is generating a languid beach buzz thanks to new boutique and luxury resorts; colonial-era vestiges are under restoration in Battambang and Kampot, offering easy access to a more traditional, countryside Cambodia; and in remote areas like Koh Kong and Mondulkiri, wildlife encounters are drawing visitors off the beaten track to spot rare wildlife.

On the cultural front, the pre-Angkorian temples of Sambor Prei Kuk were recently anointed as the country’s third UNESCO World Heritage site, joining the legendary temples of Angkor and the mountaintop temple of Preah Vihear on the list. It seems that the dark history of the Khmer Rouge period is finally taking a back seat to the richer, deeper and more ancient culture of the Khmer Empire which expresses itself in everything from classical dance to sublime sculpture. The Khmers came, saw and conquered much of mainland Southeast Asia during the heyday of the Angkor God Kings from 802 to 1431 and acted as a distillery for Indian religion, scripture and culture to permeate the region. Like the Romans in Europe, the Khmers left their monuments dotting the landscape as far afield as Laos and Thailand and a legacy of long, straight roads connecting them. 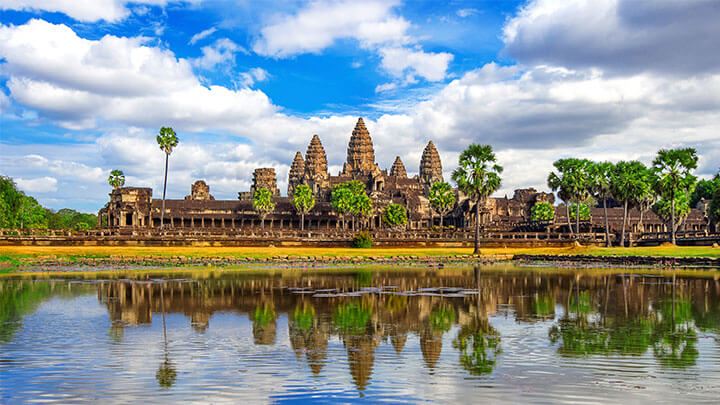 Indian traders and holy men brought their culture by seafaring routes as early as the first century and after many years in slumber, this coastline is finally awaking. In a region fringed with beautiful beaches and home to such heavyweights as Thailand and Vietnam, the Cambodian coast has long been overlooked. However, with 273 miles of prime seafront and 60 islands, all this is set to change with the opening of a cluster of new luxury resorts. Song Saa Private Island was the pioneer in luxury beach resorts in Cambodia, but the past year has witnessed the opening of The Royal Sands Koh Rong, Alila Villas Koh Russey and Six Senses Krabey Island, so accommodation aficionados are now spoilt for choice. However, beyond the headline-grabbing island openings, there is also the somnolent seaside town of Kep, once known as Kep-sur- Mer and the Cambodian Riviera in the days before war and genocide cast a long shadow over this land. Now, it’s emerged from the other side and offers some discrete boutique escapes in this sleepy corner of Cambodia.

A walk on the wild side

For those who prefer adrenaline to relaxation, the jungles of Cambodia are home to a number of nascent ecotourism initiatives that are drawing visitors and winning awards. The Cardamom Mountains are one of the last great wilderness areas in Southeast Asia and plotting an environmental expedition is now possible thanks to the ultra-luxurious, Bill Bensleydesigned Shinta Mani Wild and the elegantly understated Cardamom Tented Camp. For those who want to combine water and wildlife, there is also the option of 4 Rivers Floating Lodge, recently refurbished and relaunched in Koh Kong where the Cardamoms meet the mangroves.
Beyond the Cardamoms, Mondulkiri is a northeast highland escape where the wild things are. The much-vaunted Elephant Valley Project has its home here and was a pioneer of the ‘walking with the herd’ approach to elephant interaction that has seen the tourism industry turn its back on elephant riding. In nearby Seima Protected Forest, it is possible to enjoy some legitimate monkey business through a pioneering gibbon-spotting initiative raising money for community development. Mondulkiri is easily combined with the Mekong River town of Kratie and the chance to spot rare freshwater Irrawaddy dolphins in the coffee-brown waters of the ‘Mother River’. 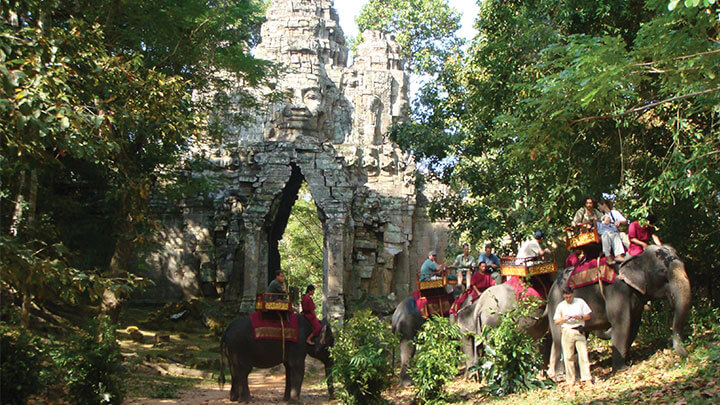 Cambodian cuisine on the boil

Cambodian food is also in the culinary spotlight, thanks to an increasing number of visitors sampling the delights of classical Khmer cuisine and a host of fusion flavours cooked up by a new generation of experimental young chefs. Phnom Penh is the foodie capital of Cambodia and a great starting point to sample everything from designer dining inspired by royal recipes to sizzling street food tossed together in the markets. World-renowned chefs have passed through the country on culinary showcases, including Gordon Ramsay, Anthony Bourdain and Rick Stein, and it is possible to learn the tricks of their trade with a ‘celebrity chef cooking class’ in Siem Reap. Amok is the national dish of Cambodia, a succulent, aromatic curry of steamed fish in a banana leaf.
Despite the rapid pace of change in Cambodia, one element remains constant during a trip to the kingdom and that is the sheer joy of interacting with the Khmer people thanks to their indomitable spirit. Whether it’s the natural hospitality of the hotel staff, the laughter of a local vendor on a street stall or discovering the family story of a tour guide, the people of Cambodia leave an indelible imprint on the soul. Cambodia is a country that will not easily be forgotten. 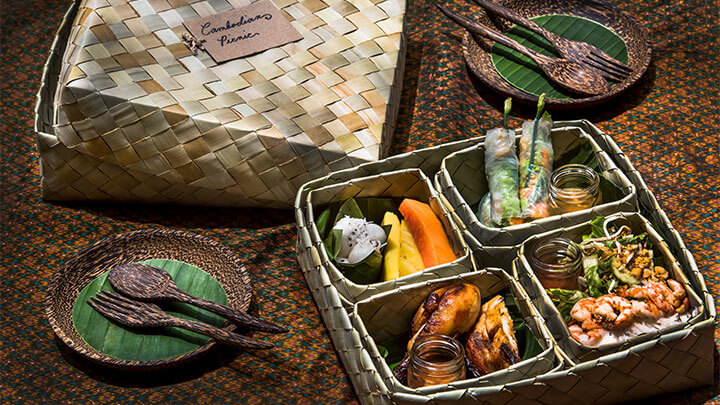 ● Discover the temples of Angkor like the locals on a ‘hidden trails’ mountain bike ride that uses jungle paths to connect these epic monuments.
● Good-cause dining abounds in Cambodia to help give disadvantaged youths a hand into the hospitality industry: try Romdeng in Phnom Penh or Marum in Siem Reap.
● For a bird’s-eye view of Phnom Penh, check out the 37th-floor sky bar, Sora, in the new Rosewood Hotel.
● Visit the Artisans Angkor training school in Siem Reap to see beautiful handicrafts created as part of a project to revitalise the arts and crafts industry in Cambodia.
● See the sun slowly melt into the horizon over a signature cocktail at the Sailing Club in Kep.

Angkor may be the magnet for most visitors, but it is the people that linger long in the memory after a journey through Cambodia, thanks to their heartfelt welcome and infectious sense of humour. 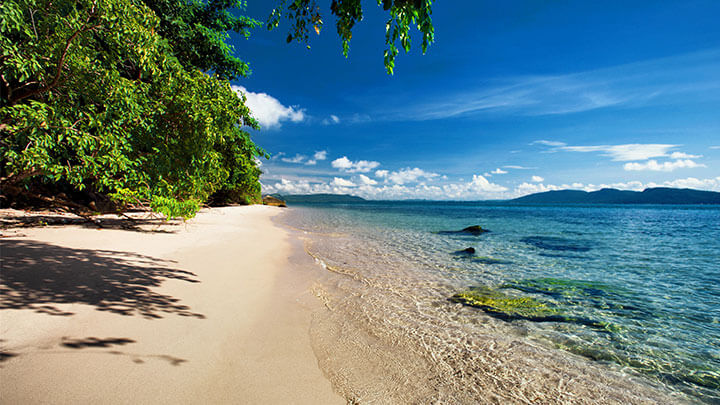 Cambodia has three seasons: hot, hotter and hottest, so the best time to visit is for the ‘cool’ season from November to February when temperatures plummet to a balmy 25ºC.
Big ticket events include colourful Khmer New Year in mid-April and the Bon Om Touk Water Festival, with its hotly contested boat races in October or November.

Where to Stay in Cambodia

Our pick of the best places to stay in Cambodia

Nestled in beautifully landscaped gardens and rice paddies on the fringes of Siem Reap, Phum Baitang is ideally located for exploring the temples of Angkor. But its setting is so stunning, you’ll find it hard to tear yourself away from relaxing by the pool or indulging in the spa. 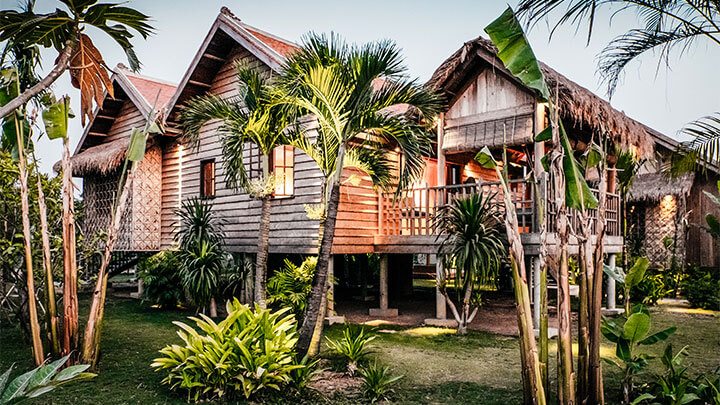 With sands so white and powder-soft they rival any to be found in the Maldives, The Royal Sands Koh Rong boasts one of the best beaches we’ve ever laid eyes on. It’s lapped by waters so clear that snorkelling among the vivid coral gardens is like peering through a window into another world, making this resort the perfect end to any Cambodian adventure. 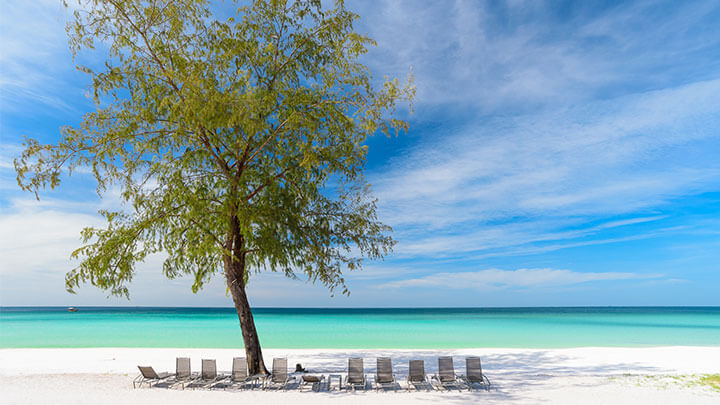 The tiny volcanic island of Krabey has been transformed into an intimate retreat, with 30 carefully landscaped acres to preserve the wild surrounds. Its villas blend in naturally thanks to the local timber, volcanic stone and green living roofs used to construct them, creating a jungle-luxe vibe. Plus, the spa here is one of the best we’ve seen! 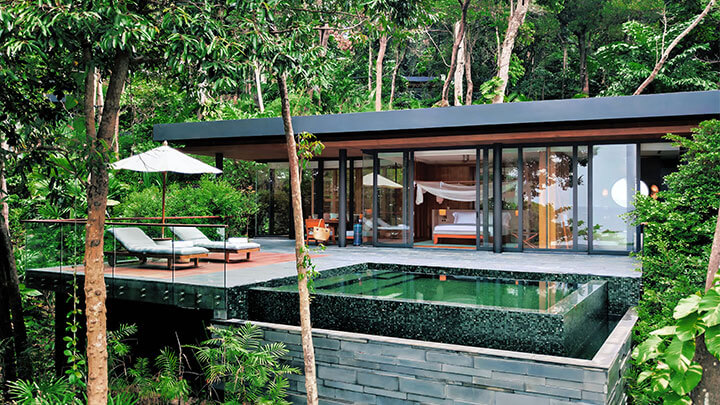 A real drop of luxury in wild Southern Cardamom National Park, this Bill Bensley-designed tented retreat features several fabulous creative touches, from the outdoor bathtubs overlooking the gushing river to the retro decor. Your arrival is certainly unique – zipwiring past a waterfall from a watchtower presiding over the epic wilderness. 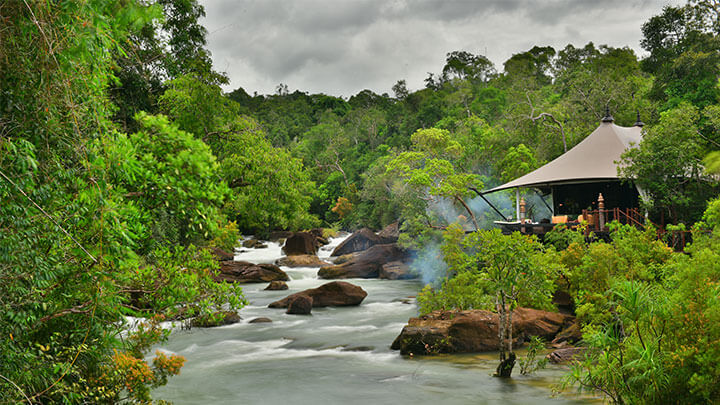 Pitched right in the exotic heart of Cambodia’s capital, the Rosewood rises high above Phnom Penh like a beacon of contemporary architecture laced with subtle Khmer influences. Its rooftop bar is the main draw, lording over the city with eye-popping panoramic views. 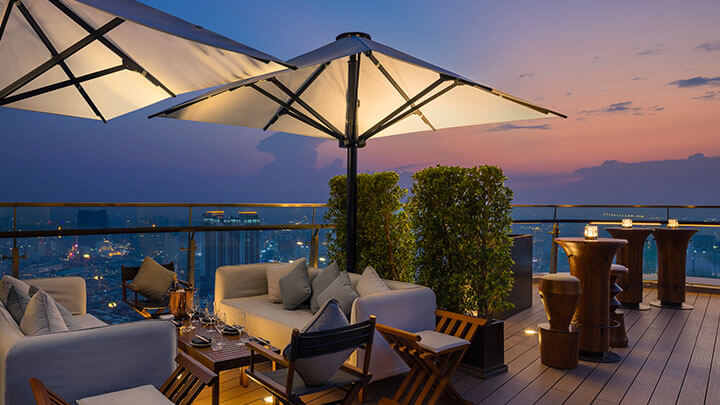 Travel writer, tour lecturer, sustainable tourism consultant, location scout and line producer, Nick has filled a wide range of roles during his work in travel, television and film in Cambodia. Nick has written the best-selling Lonely Planet Cambodia guidebook for more than 20 years, as well as contributing to other country guides on Laos, Myanmar, Vietnam and Indonesia. Nick worked as the location manager on Lara Croft: Tomb Raider when Hollywood came to Angkor and was the line producer on the legendary Top Gear Vietnam episode. More recently, he was the producer

Where to Go for Your 40th Birthday