Honeymooners from around the world are captivated by Bora Bora’s legendary charm. Known as the Pearl of the Pacific, James Michener is credited with describing Bora Bora as the world’s most beautiful island – it is undeniably the most romantic. Its dazzling lagoon is dotted with a string of pearl-like sandy islets, known in Tahitian speak as motu. Imagine being marooned on one of these tiny pristine motu with nothing but a romantic table for two set in the blue lagoon waters or on the beach: suddenly shipwrecked takes on a whole new meaning. This dream can be very much a reality when staying at the contemporary-meets-Polynesian-chic Hilton Bora Bora Nui Resort & Spa. Just five minutes away by boat, the resort’s very own private Motu Tapu provides the perfect romantic island escape. Would-be Robinson Crusoes can even overnight under the stars in a Polynesian-style canopy bed. 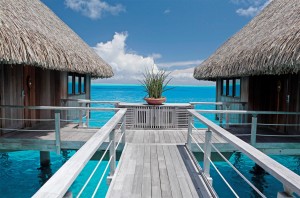 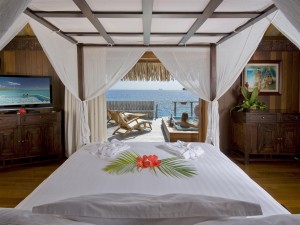 From the moment you land at Bora Bora airport (also on an islet in the lagoon), you’ll fall under the spell of this South Pacific jewel. A boat will be waiting to whisk you away to a beautiful cove of white sand on the lush, mountainous volcanic islet of Motu Toopua, southwest of Bora Bora’s main island, where an enchanting welcome awaits at the resort’s unique over-water lobby. An ambience of casual elegance pervades throughout. Your romantic refuge is an utterly spacious villa with a separate living area. Some are set amid verdant greenery with lagoon views, others hug the hillside, while the majority are perched Bora Bora-style over the glistening water. Paying homage to the lagoon’s iridescent aquarium below, the over-water villas boast custom-lit glass f loor panels – Tahitian television at its absolute best. Relax and be pampered at the hilltop spa with a menu of blissful treatments and while your body reinvigorates, take in the breath taking views of Bora Bora’s majestic Mount Otemanu and the neighbouring islands of Taha’a and Raiatea. If gazing to the horizon is high on your honeymoon wish list, the over-water villas face the ocean, with not a single building in sight as far as the eye can see.