Turquoise Travel Diaries: the south and the north of Saint Lucia

Turquoise Travel Diaries: the south and the north of Saint Lucia

Saint Lucia is the only country in the world named after a woman and, although her beauty is undeniable, this is a lady with a split personality! We explain why you should really divide your time in two in Saint Lucia…

In the north, life goes by in a flurry of activity – think busy markets, happening bars and ports bustling with cruise ship passengers. And, thanks to the golden sandy beaches, this is also where you’ll find the highest concentration of relaxed, beachfront resorts. Down south, life slows right down, the landscape goes right up (into the mountains) and the air is heady with romance. Boutique hotels tucked away down leafy lanes attract honeymooners but, thanks to the thick rainforest and the adventures to be had down here, it’s also where you’ll spot birdwatchers, nature-lovers and even adrenaline junkies.
Getting from one end of the island to the other by road isn’t quick on Saint Lucia, so it makes sense to base yourself where you think you’ll spend the majority of your time. However, it is entirely possible (and, to my mind, entirely recommended!) to divide your time with a stay in a hotel in the north and a stay in a hotel in the south. Because there’s no such thing as too much of a good thing, right? 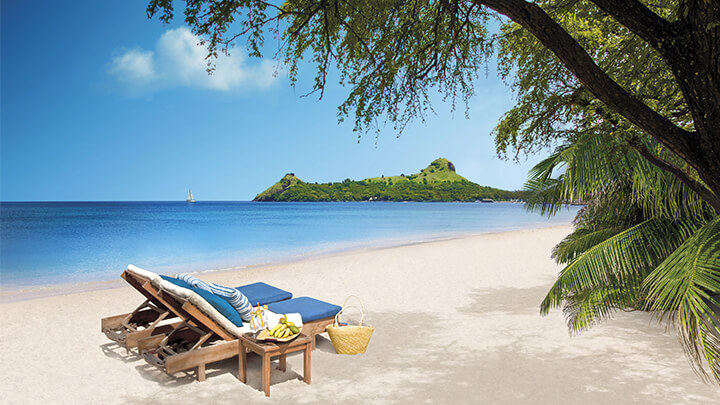 Driving from Hewanorra International Airport in the south, to the hotels in the north, generally takes around 90 minutes via meandering roads. However, there’s a small, domestic airport in the north so you can transfer in less than 10 minutes (and in considerable style!) via helicopter if you wish. The airport-to-airport shuttle service is operated by Saint Lucia Helicopters and, although the route is direct, it does still take in some marvellous views of the rainforest, volcanic peaks and Atlantic coastline. As the ride is shared, it’s not as expensive as you might think and is such a great experience that it’s almost an excursion in itself.
Although it’s tempting to just enjoy the beach at your resort, it’s definitely worth getting out and about, as there is so much to see and do up here in the north. Most activities centre around Castries (the capital) and Rodney Bay Village. Castries is not the Caribbean’s prettiest town but it does have a great market, which is well worth a visit. A warren of stalls are piled high with t-shirts and souvenirs, as well as locally grown fruit, fresh cocoa, bags of spices and jars of local coconut oil.  Rodney Bay Marina always has lots of swanky yachts moored up so, consequently, lots of swanky bars and restaurants have popped up, too! It’s particularly buzzy on weekends and is a great place to grab a drink and just people-watch.

Rather than being an island, Pigeon Island is now connected to the main island via a causeway, so it’s easy to reach by road and I would definitely recommend a visit. Formerly a pirate hideout and military fort, it’s now a national park where you can wander through the ruins and hike up the hill to enjoy some pretty stunning panoramic views over the Caribbean Sea. It’s a reasonably steep climb, so be sure to pack some walking shoes or trainers if you intend to do it.

To party like a local, Gros Islet is the place to be on a Friday night for the weekly street party or ‘Jump Up’.  I’ve always had a great time here but it is, perhaps, not for the faint-hearted – think crowded streets, booming reggae music and lively Caribbean dancing fuelled by potent rum brews!  The fun starts around 8pm and continues until the wee small hours.

If you don’t want to take the chopper again, you can transfer back to the south by car along local roads which wind through rainforest and fishing villages – and, as you won’t have just stepped off a long flight, it’s actually really interesting and enjoyable!

In terms of things to do down here in the south, I would highly recommend the ‘Bean to Bar’ experience at Boucan by Hotel Chocolat. You’ll get to grind up cocoa nibs yourself, before adding sugar and cocoa butter and coming away with your own handmade chocolate bar. Be sure to stay on for lunch and a cocktail, as the food and drinks are to die for. Every dish, whether sweet or savoury, contains a cacao element and the results are both surprising and absolutely delicious. 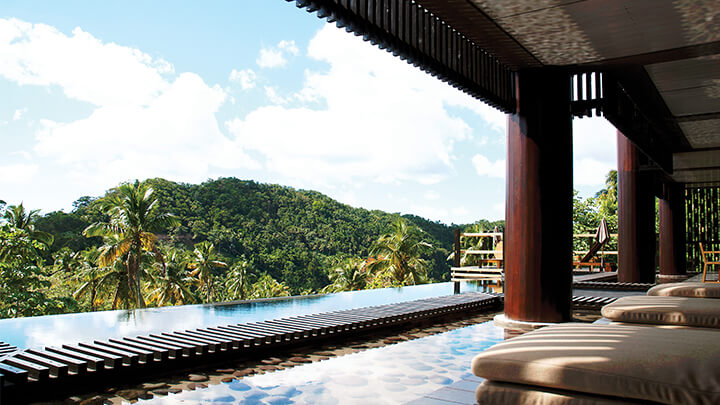 Just along the road from Boucan is the Treetops Adventure Park, where you can enjoy a rainforest hike, canopy tramline and even zip-lining. The latter is not as scary as you might think… I’m a real scaredy-cat when it comes to these things and even I loved it!

No visit to Saint Lucia would be complete without seeing what is arguably the most arresting sight in the entire Caribbean – the twin volcanic peaks of Petit Piton and Gros Piton rising out of the blue waters. My favourite place to gaze at them is from the truly breathtaking hotel Jade Mountain, which always reminds me of a futuristic castle suspended in the air. All of the suites (or, as they call them, Sanctuaries) face towards the magnificent sight of the Pitons, have a private plunge pool and are a work of art and architecture in themselves. High ceilings and a missing fourth wall emit a feeling of sleeping outside and this place couldn’t be more romantic if it tried. 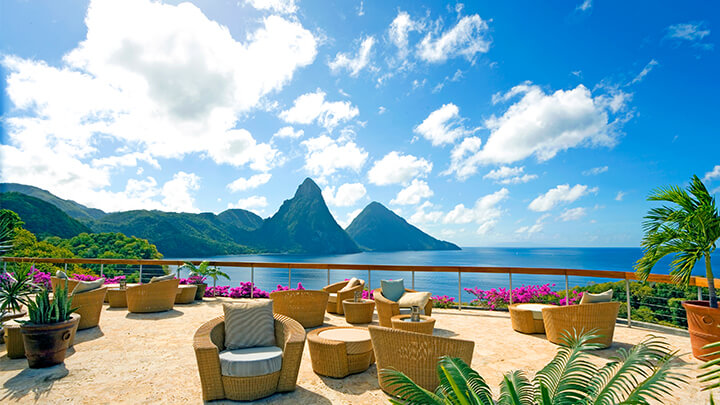 From your hotel in the south, it’s then just a short hop to the airport for your return flight home – if you can bear to leave, that is!

Feeling inspired? Get in touch today to start planning your sojourn to Saint Lucia