Travel guide Lonely Planet released its latest list of the world’s happiest places. On top of the list is the South Pacific island country of Vanuatu, while Montreal in Quebec came in second. Lonely Planet said it was not surprised by Vanuatu emerging as the happiest place because the general idea of a happy life has images of a hammock in a white-sand beach. All these could be found in the island, known for its blue waters teeming with life, lush vegetation and scenic environment. (Source: (AHN) All Headline News Montreal, Quebec, Canada 03 August, 2010)

Meaning the ‘land that always existed’, Vanuatu is a Y-shaped archipelago made up of 83 islands which stretch over some 800 kilometres of South Pacific Ocean. A diverse land, Vanuatu boasts towering volcanoes, lush rainforest, coral atolls, sandy beaches, rich culture and tradition and welcoming people.

Vanuatu’s main island, Efate, is home to the country’s capital as well as several wonderful retreats, and is where visitors will certainly want to spend at least some of their time. The small capital of Port Vila is set within a magnificent harbour and undoubtedly boasts some of the Pacific’s best restaurants, taking full advantage of its pot-pourri of cultures to blend the best elements of Melanesian, English, French and Chinese tastes.

Open 24 hours a day, six days a week, the delightful market is a great place to try the local food and meet the local people with their colourful variety of flowers, fruit, vegetables, handicrafts and artefacts. Many of Efate’s properties lie within a stone’s throw of the centre of Port Vila, meaning that the markets and charming local restaurants can easily be explored 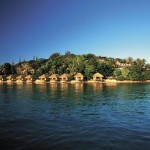 From the vibrant Melanesian culture and scenic wonders to Port Vila’s cosmopolitan restaurants, Vanuatu is a land of great contrasts. The welcoming smiles and warmth of the people (Vanuatu is described as the ‘World’s Happiest Country’) are what also make this such a fabulous place! May to October (the dry season) generally brings fine warm days whilst higher temperatures and tropical rains can be expected from November to April. Vanuatu is a one and a half hour flight from Fiji, two and a half hours from Brisbane, three hours from Auckland and three and a half hours from Sydney.

Having been at the helm of Turquoise Holidays since its inception in 2002, I finally decided to let my friend, business (and golf!) partner, James Bell, take complete day to day charge of running Turquoise from the summer of 2016…