Here at Turquoise we have been asking friends & clients to tell us a little a bit about an object or thing which is close to their  hearts…so I thought it only fair that I should go first and tell you the story of my engagement on Lizard Island in tropical North Queensland. 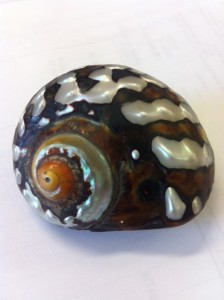 nd rugby balls however I did love geography and on a geography field trip to North Wales I found the most amazing shell, such was its beauty & rarity I decided to take it back with me and keep it in my tuck box, alongside all my other boyhood treasures… catapult, cigarettes and a number of magazines I should not have had!!!

Later on in life, having found my true treasure and love I hatched what I believed to be the most romantic, inspirational and breath taking proposal ever conceived… eat your heart out Romeo.
My plan was simple and involved the transportation of my treasured North Wales shell to Queensland safely hidden in my pocket. I would then place my engagement ring into the opening of the shell, seal it with a piece of cotton wool and carefully position the shell onto the beach. One evening at sunset on a romantic walk I would then point the dazzling shell out to my fiancée who would be captured by its beauty and amazed by its contents and then I would strike and drop to one knee, how could she refuse? A brilliant plan… or so thought.
�
All went well until our arrival on Lizard Island, where the blindingly white beach was littered with shells four, five and twenty times the size, beauty and pigment of my small North Wales specimen.
Even the foot bath outside our room  was an enourmous pearly pink  vacated clam shell… let’s be honest my shell looked very ordinary in comparison!

It was a happy end though despite the failure of my plan…I did get the girl and I still have and love my little shell. The moral of my story remains very clear to me… something close, personal and precious to you is worth more the brightest and biggest of shells!  You will love Lizard Island by the way…