A lovely story about a turtle named Olivia…

A lovely story about a turtle named Olivia…

We have a delightful turtle story that we like to share with you. After a year in Landaa Giraavaru’s Turtle Rehabilitation Centre recovering from a nasty head injury, Olivia the Olive Ridley turtle was finally released back into the wild in February 2012, equipped with a satellite-tracking device mounted on her carapace.

She’s loving her second lease of life, having covered a staggering 510 kilometres in her first month alone, and travelled into the middle of the Indian Ocean! But there’s much more to our monitoring than just seeing how far Olivia has swum. With so little research into Olive Ridley turtles, Olivia is a pioneer for her species, contributing to valuable research into the movements of the world’s smallest sea turtles.

Since 2010, the Rehabilitation Centre has nurtured and cared for nine severely injured turtles, seven of which have been successfully released back to the wild. Its current patients include Sally, a young female Olive Ridley found suffering from multiple lacerations and buoyancy problems, and Clover, a young male Olive Ridley with deep lacerations around his neck.

Olivia was the Centre’s longest-staying resident to date. Now – thanks to her tagging device – she’s set to become its most famous! Watch the video of her emotional release here:  http://youtu.be/r-V258pQ7ls after 12 months in our care, then follow her whereabouts via our regularly updated
‘Olivia-link’: http://g.co/maps/5z2uy .In addition, we’ll be sure to keep you notified of any interesting developments in her epic journey of discovery.

Currently, there are two other turtles, Sally and Clover, that are been nursed in our Turtle Rehab Centre. We’ve just received fantastic news that another of our kind-hearted guest has offered to sponsor a satellite tag for either one of them. We are looking forward to expanding our team of turtle marine researchers in the very near future!’ 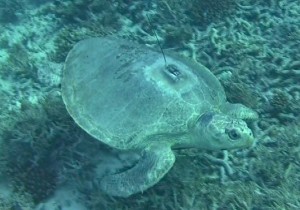