From spotting blue whales to ticking off its ‘Cultural Triangle’, Sri Lanka is chock-full with unforgettable places to visit. Here’s nine of our must-visit places…

No visit to Sri Lanka is complete without visiting the Cultural Triangle, a treasure trove of ancient ruins and historic sites in close proximity to one another. Rent a bike and pedal the evocative ruins of ancient capital Anuradhapura, a wide-ranging complex of brick stupas, vast monasteries and crumbling temples or wander its more compact little sister, Polonnaruwa.

The Cave Temples of Dambulla are another of the Triangle’s wonders, a UNESCO-listed temple complex where five caves hoard around 150 beautifully preserved Buddha statues and a collection of intricately sketched religious rock paintings.

However, Sigiriya Rock Fortress arguably is the most spellbinding sight, a huge outcrop rising up from the rolling plains. Climb to the top and explore the ruins of an ancient civilization, before soaking up the epic views of the encircling mist-shrouded forest. 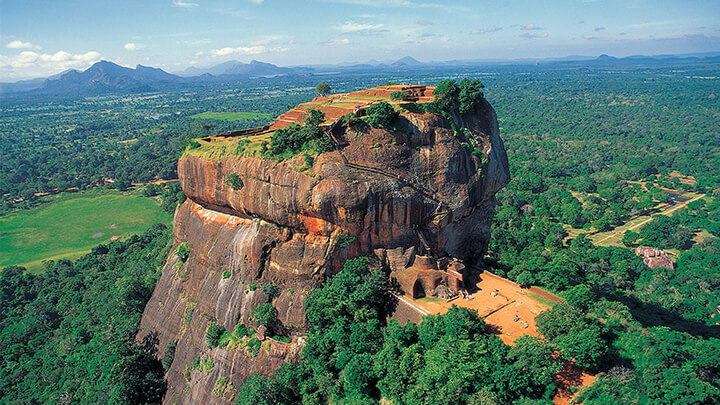 Nestled within the Dutch colonial city of Galle, this namesake fort is a city within a city. Take a stroll down its labyrinthine streets and soak up the bustling atmosphere of a place that is still used today, with offices, cafés and jewellery shops emerging from behind preserved columns, while the old stables now house an interesting museum. It’s an enchanting glimpse into the Sri Lanka of yesteryear. 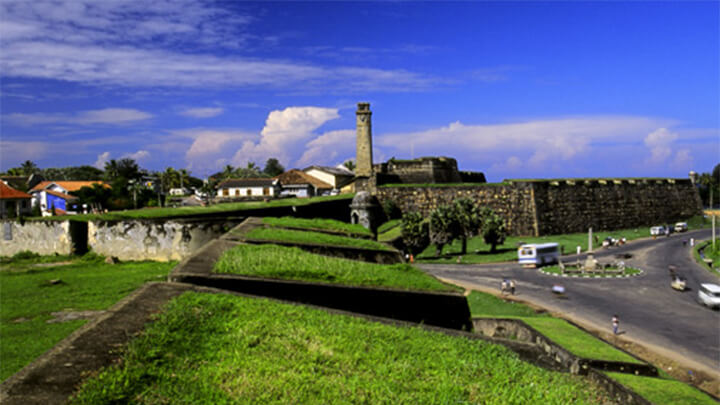 Emerald bubblewrap hills covered in tea plantations, splashed with dappled sunlight and stretching for as far as the eye can see. Sri Lanka’s Hill & Tea Country is the island at its classic best. It’s an image that resonates with every traveller and these heavenly central heartlands are a personal favourite of ours, too. Of course, it would be rude not to see a tea plantation while you’re there and visits to places like Finlay’s Green Tea factory offer a great insight into the tea-making process, while a stay at Ceylon Tea Trails even gives you the chance to join the tea pickers on the hills, learning which shoots and leaves make the best ‘cuppa’. However, make time to climb the five miles up to Lipton’s Seat for an eye-popping view across the endless mist-shrouded hills that make the Tea Country so special – an image that will stay with you forever. 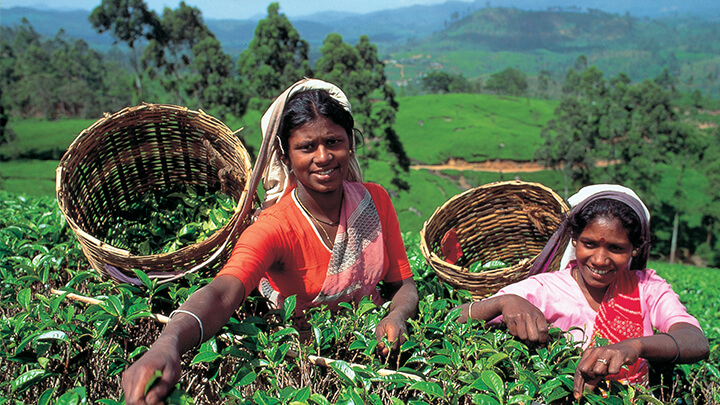 Temple of the Sacred Tooth

If you’re staying in Sri Lanka’s Hill Country capital of Kandy, then a visit to the country’s most sacred Buddhist site is a must. The golden-roofed Temple of the Tooth, or Sri Dalada Maligawa, is home to the Sri Lanka’s most revered Buddhist relic – a tooth from the Buddha. While you don’t get to see the tooth itself – it’s contained within a stupa-shaped gold casket – the temple and surrounding shrines, museums and temples are a joy to wander. 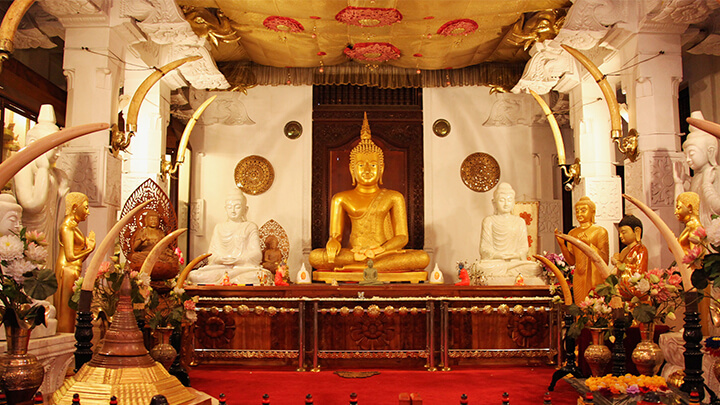 Tucked away on Sri Lanka’s south-east coast, Yala National Park is a true wildlife gem. The planet’s biggest concentration of leopards, with reportedly one leopard for every square kilometre, prowl its scrubland and grassy plains and while there’s never any guarantee of a sighting, here’s probably your best chance to see them in the wild. This big cat is undoubtedly Yala’s showstopper but the park is home to much more, boasting 44 mammal species and 215 species of bird. Keep your eyes primed for Sri Lankan elephants, wild water buffaloes, mugger crocodile and sloth bears, while scan the skies for the endemic Sri Lankan grey hornbill, Indian peafowl and lesser flamingo. A real feast of wildlife-watching. 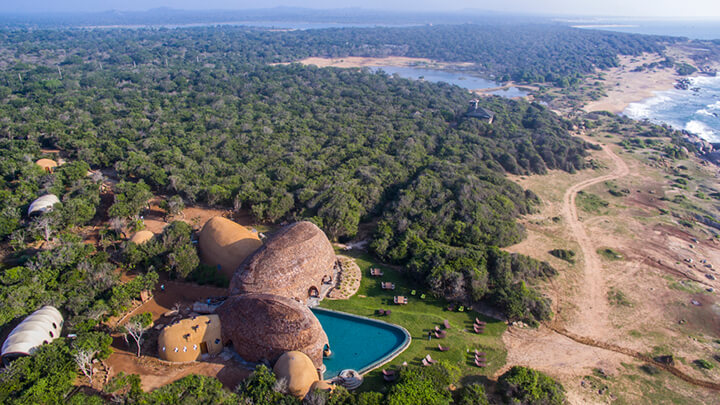 The centuries-old craft of batik-making, which involves dyeing cloths to make intricate patterns, may have originated in Indonesia but Sri Lanka has become a second home for this art. Nowhere better is this on display than at the Matale Heritage Centre, a stone’s throw from Kandy and the place where renowned batik artist Ena Da Silva honed her skills. Pore over her expertly made batik, stroll the charming gardens and sit down to a 25-course meal, trying traditional and sumptuous curries and rices. 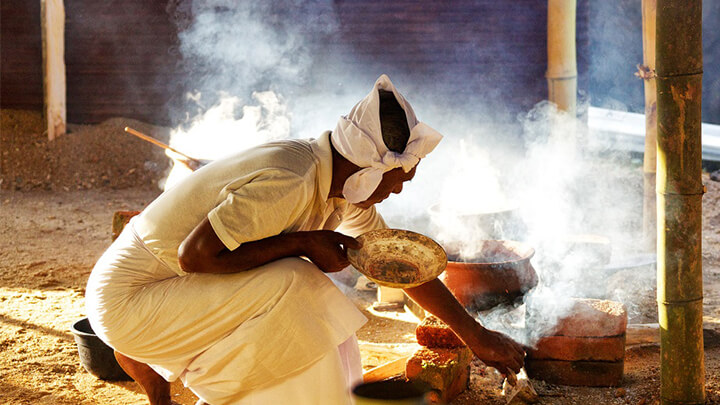 Watch whales off the south-west coast

With golden stretches of palm-fringed sands, the sleepy beach town of Mirissa on Sri Lanka’s south-west coast is perfect for a quiet retreat. However, don’t dismiss it as simply a place for recharging under the sun, as it’s one of the best spots for whale-watching. Hop on a boat and cruise out into the Laccadive Sea in search of the globe’s biggest animal – the blue whale. They’re regularly sighted here (almost on a daily basis) and they’re supported by a fine supporting cast, with pilot, sperm and Bryde’s whales also frequenting the waters, as well as bottlenose and spinner dolphins. You’ll have a whale of a time (sorry)!

Owing its name to the appearance of its five peaks resembling a closed fist, a hike to the Knuckles mountain range is a walk through a richly biodiverse landscape. Pass rolling tea plantations, cooling waterfalls, lush pygmy and cloud forests and grassland plateaus, spotting wild boar, spotted deer and purple-faced langurs along the way. Crane your neck skywards for glimpses of yellow-fronted barbet and dusk blue flycatcher – just two of the 15 endemic bird species in this area. Clamber up the Knuckles, the highest point sitting at around 6,000ft, with spectacular panoramic views of the forested craggy landscape your reward. 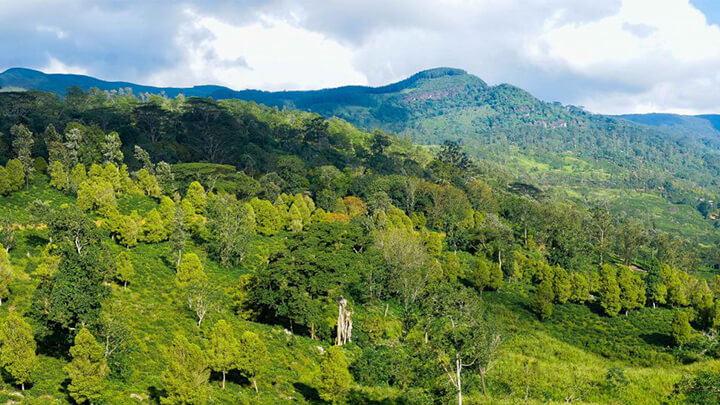 Take a vintage train from Kandy to Ella

Often touted as one of the world’s most beautiful rail rides, a seat aboard the vintage train from Kandy to Ella is arguably a Sri Lankan icon in itself. Its roster of vistas is certainly enviable, as you’ll chug past mist-wrapped mountains, waterfalls seeping from hills and wildflower-filled meadows. A large part of the journey slices through prime Tea Country, where you’ll come nose-to-nose with smiling tea pickers as they scour the bushes for the finest leaves. Spy tiny villages which pock your lush surrounds and finish by rolling into Ella with your senses totally stirred. 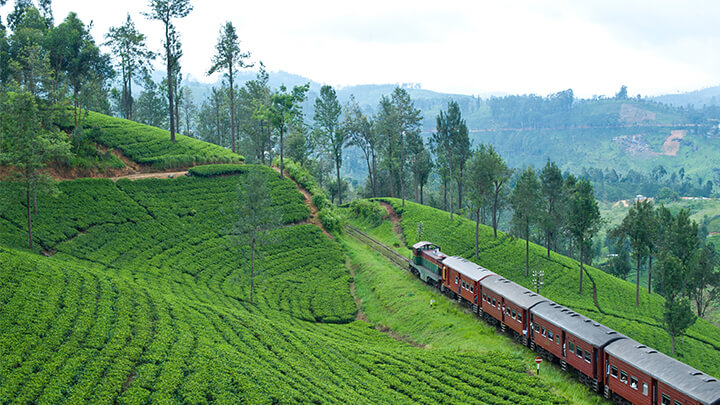