When summer comes here in New Zealand and the pohutakawa trees glow with their Christmas red blossoms, an annual migration takes place where Citysiders pack away their suits and unpack their jandals (flip-flops) and shorts and head for the beach and their baches!

I decided this summer to visit an area I’ve only been lucky enough to visit once before and which many Kiwis haven’t had the fortune to visit.   The region, affectionately named ‘Out East’ lies on the eastern extremity of the North Island of New Zealand – some call it Eastland, The East Coast  or Tairawhiti (“the coast upon which the sun shines across the water”) but whatever you call it – it’s worth setting your compass and yo
ur mind and head OUT EAST!

I started my journey leaving the rolling hills and laden vineyards of the Hawkes Bay behind and headed North on State Highway 2 where the road weaves it way through farmland and small settlements that if you blink as you drive through you’ll miss them.   I stopped at the riverside town of Wairoa (located halfway between Napier and Gisborne) to stretch my legs and shop for provisions for my next stay, at the Quarters at Te Au Farm, located on the Mahia Peninsula.

The beach-fringed promontory of Mahia Peninsula juts out into the Pacific Ocean and is a mecca for people who love the sea.  It provides a vast playground for a great variety of activities such as fishing, diving, surfing, mountain biking or walking the rugged hills and beachcombing the endless sandy beaches.  Life feels that it slows here and almost moves to the rhythm of the tides.

The Quarters, is a rustic self-contained cottage perched on the cliffside of a working 700 hectare coastal farm on the Mahia Peninsula.   Don’t be put off by the unsealed roads or the steep climb to the cottage, when you open the door – the view is to die for.   Originally a traditional shearers quarters Malcolm and June (the owners) moved the cottage to this spectacular site, and renovated it without losing its original identity.  The front of the cottage almost opens up to embrace the views of the Peninsula and the coastline up to Gisborne and the deck is the most perfect place to enjoy a glass of wine.    There is plenty to do on the farm, be it exploring the farm walks, taking a farm tour or an after dark glowworm tour with Malcolm, or just sitting and relaxing and soaking up the view.

After a soul reviving stay, I carried on SH35 towards Gisborne -sitting proudly on the edg 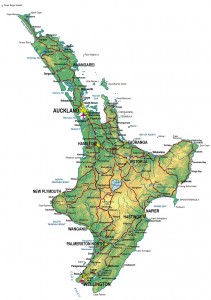 e of the Poverty Bay Flats and the Pacific Ocean.   Gisborne’s history, location and people make it a great destination to discover, as Captain Cook did when he first set foot here in 1769.  Gisborne (or “Gizzy” as it’s known) is one of the sunniest places in New Zealand.   Explore this compact little city with many character buildings and colourful characters on the street,  and enjoy the freshest local seafood and local wines at one of the inner harbor restaurants whilst watching the sun set,  or explore the surf beaches of Wainui (don’t go past the Wainui Store without picking up a fresh coffee, or icecream).

From Gizzy, I headed North on State Highway 35 and embarked  on one of the Southern Hemisphere’s great coastal road journeys.  Time slows down in this magical part of the world where there are scores of beautiful beaches, bays and quaint coastal villages.   This touring route offers some of the world’s most spectacular coastal scenery and breathtaking ocean views.    Places not to miss are Tolaga Bay with New Zealand’s longest wharf (660 metres!);  climb the 700 odd steps to visit the most easterly lighthouse in the world – East Cape Lighthouse where the views are spectacular;  see the beautiful carvings at Tikitiki church, one of the most ornate Maori churches in New Zealand.  Whether you choose to drive SH35 in a day (it is doable but it is a long drive), or whether you choose to linger – it is so worth exploring this little corner of “New Zealand as it used to be”.

For more information on The Quarters…http://bit.ly/AgYNoJ