You can see Bora Bora from Taha’a (as the crow flies, it’s only 10 mins in the air) ….I had a real feeling of smugness, when sitting on the deck of my overwater bungalow at Le Taha’a looking back at Bora Bora, that I’d discovered the real hidden jewel of Polynesia …..while everyone else was paying a premium for staying on Bora Bora ……

Le Taha’a Island Resort & Spa is actually located on its own beautiful islet (motu) in the Taha’a lagoon (the same concept as Bora Bora i.e. Bora Bora has a main island – and then most of the hotels and retreats are located on islets in Bora Bora’s lagoon, and are only accessible by boat). The main island of Taha’a is renowned for its vanilla plantations (it is known as the vanilla island) – and in many respects, Taha’a is still waking up to tourism …you can take a boat from ‘Le Taha’a’ to the main island of Tah’aa and go exploring for a day in a 4×4 to see the vanilla plantations with the local farmers, or visit a pearl farm …or you can simply enjoy the luxury, privacy and serenity that Le Taha’a is renowned for ……everyone’s heard of Bora Bora, but no-one has heard of Taha’a …it’s a special hideaway with its own charm ….a glimpse of the traditional, tranquil life of the real Tahitians ….Bora Bora is known as the legendary romantic island …but if romance is defined by privacy, stunning setting, serenity, pristine surroundings ….then Taha’a is just as romantic as Bora Bora! 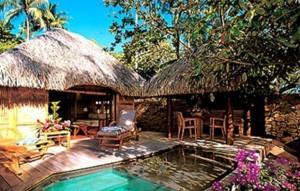 Taha’a doesn’t even have an airport – so in order to get to Taha’a, you fly from Tahiti (where the international airport is located) to Taha’a’s neighbouring island of Raiatea (which shares the same lagoon as Taha’a) – and here you board a lovely boat and enjoy a 30 minute boat ride to Le Taha’a Island Resort & Spa. The other important point to note is that the Taha’a / Raiatea lagoon is perfect for sailing …the safe calm waters and Pacific breezes make it perfect for year round sailing ….for experienced sailors and novices alike (most of the key nautical companies such as Moorings, Sun Sail etc have bases in Raiatea) ….so another angle is to charter a yacht with a skipper and enjoy a few day’s sailing ….before being dropped at Le Taha’a …..or the other way around, enjoy a stay at Le Taha’a and then go sailing …..

Le Taha’a has a choice of overwater bungalows (some face the island of Taha’a, some face the beautiful sunset which Taha’a I renowned for and others face Bora Bora ….and if you really want to splash out, you can request an end of pontoon bungalow) …and there are also some Beach Villas too which I think are stunning (the Beach Villas each boast their own private pool) ….

..and there is also a heli-pad so you can fly by helicopter between Bora Bora and Taha’a (by heli, this is literally only 10-15 minutes in the air) ….so you could go to Bora Bora first for a few days – and then take a helicopter across to Le Taha’a – the ultimate in romance and decadence!

Le Taha’a also has a choice of 3 restaurants …and 2 bars…lovely stretches of pristine white sand..and of course, there’s the stunning lagoon!

My love of all things travel started when I moved to Spain for a year and loved with the way of life, beautiful sunshine and lovely beaches. After I moved back to the UK I wanted to start my career…