Cambodia is home to the magnificent temples of Angkor, whose very name conjures images of Asian mysticism, jungle temples and the exotic architecture that’s unique to the region. It has captured the imagination of travellers ever since Henri Mouhot visited the ruins in 1860 and is, without doubt, one of the matchless wonders of the world.

What could be more memorable than sunrise over the distinctive towers of Angkor Wat or the golden glow of sunset on the imposing stone faces of the Bayon? The intricate beauty of these ancient temples guarantees a lasting impression.

Much less well-known is the necklace of virgin islands that line the coast. It’s no longer just Siem Reap that’s drawing travellers and the recent opening of the international airport at Sihanoukville has made this tropical paradise much more accessible. While Sihanoukville and Kep are far less developed than the shores of neighbouring Thailand and Vietnam, they’re becoming popular with honeymooners looking to get as far off the beaten track as possible for the ultimate beach escapism.

Song Saa Private Island, only an hour by seaplane from Siem Reap (home to the temples of Angkor) or 30 minutes by speed boat from the city of Sihanoukville, remains by and large a deserted oasis of virgin rainforest and tropical reefs.

“We’ve tried to create something unique, something that ref lects our love for Cambodia and its environment,” says Song Saa founder Rory Hunter. “Think Thailand 40 years ago, before Koh Samui or Phuket became the international hubs they are today. We have the pristine rainforests and empty white-sand beaches, without over-development or crowds.” It’s true that guests to Song Saa Private Island are among the first to visit this beautiful, untouched world, where rare hornbills land on your balcony overlooking warm sapphire waters teeming with life. Song Saa is Khmer for ‘Sweetheart’, and the resort’s location is as seductive as the name implies. It’s made up of two small islands, Koh Ouen and Koh Bong, which are connected by a footbridge over a marine reserve that the Hunters established to safeguard the islands’ reefs and sea life. It covers 10,760,000 square feet, and extends 650 feet from the outer edge of the reefs around both islands. 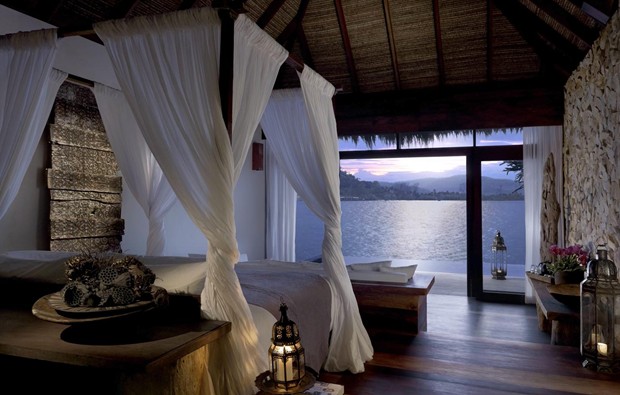 In addition to its stunning natural features, Song Saa Private Island consists of 25 luxury over-water, rainforest and beach villas built with sustainable materials and with the deepest respect for the natural environment. The design of the luxury villas and, indeed, the whole layout of the resort, was inspired by Cambodian fishing villages with features such as thatched roofs using rough-hewn natural timbers and driftwood, ensuring that the resort blends in with its natural environment. 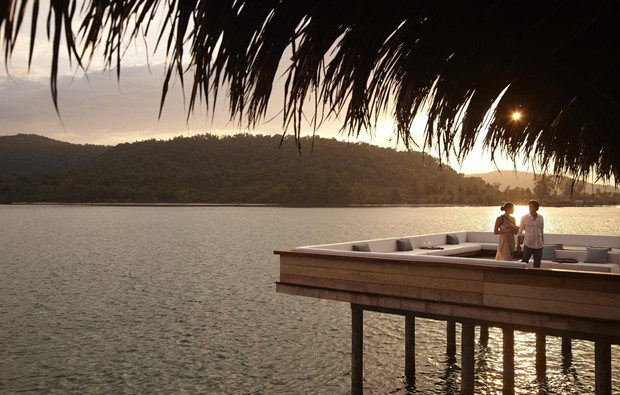 This kind of rustic chic enables guests to feel like true castaways, but with all the luxury modern creature comforts that Robinson Crusoe could only dream about – air-conditioning, a digital newspaper service, a library and even a butler service. At the heart of the resort is a world-class restaurant, spectacularly positioned, surrounded by sea. It serves a menu of local specialities and freshas- it-gets catch of the day. A short stroll along the boardwalk leaves you perfectly positioned to take in dramatic sunsets, seascapes and starry nights. Guests can explore the islands’ reefs, wander among virgin rainforest and lie on the pure white sands of Song Saa’s beaches.

With more than 20 deserted islands close by, opportunities for offshore adventure abound. Other features include a large infinity-edge swimming pool straddling both the east and west sides of the island; a spa and wellness centre suspended among the rainforest trees; the yoga and meditation centre on the eastern shore, ideal for a sunrise workout; water sports including sailing, diving, kayaking and snorkelling; and a fascinating ecological program to experience the area’s f lora and fauna. 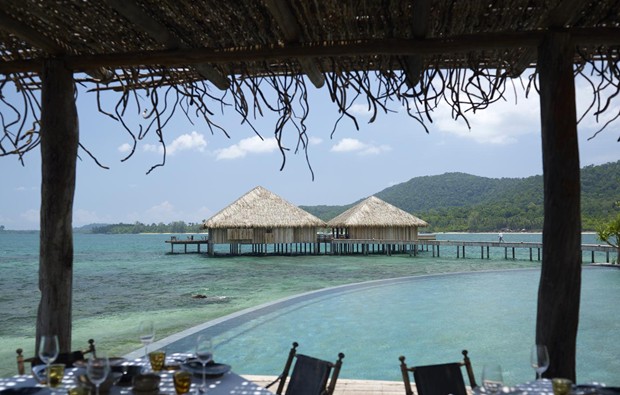 It’s worth mentioning that the waters around Song Saa Private Island are home to charismatic sea creatures, such as dugongs and green turtles. They teem with vibrant reef fish like rabbitfish and spadefish, making it an ideal place to go snorkelling or diving. Moray eels hide among the corals, while pincushion starfish, exuberant sea slugs and shy hermit crabs feed on thesea floor.

The most cherished inhabitants of this colourful underwater world are, perhaps, the seahorses, which display a fascinating range of patterns and colours, dancing among the corals and seaweed. Out of the water, the island jungle supports bat breeding colonies, roosting sites for large-ranging birds such as hornbills, sea eagles and owls, and micro habitats for orchids and lichens. Rory Hunter believes that the islands’ international profile will be raised by protecting the area’s unique natural assets, thus drawing more visitors and benefits to the local economy. Many guests are also glad to know that while relaxing on their private stretch of beach, enjoying an intimate dinner under the stars, or watching fish dart about the corals, they are also contributing meaningfully to the conservation of the marine environment and helping to support the local community. It doesn’t come any better than that.

When to go to Song Saa Private Island

Cambodia’s weather can be divided into two seasons – wet and dry. The dry season begins in November with temperatures in the mid 20°Cs. The heat increases and can reach up to 40°C in May before the rains come in June or July and last until late September.

For the majority of the rainy season, the rain consists of short, sharp showers which usually arrive in the afternoon.