Which of the French Polynesian Islands is right for me?

Which of the French Polynesian Islands is right for me?

Located in the Pacific Ocean, The Islands of Tahiti seem like a mythical destination and the centre of the romantic universe. The islands exude a power that makes every experience unforgettable. A place where every person who gets to experience Mana – the spirit of the islands – and wants to go back for more. Within the 118 islands, there’s an island for every single person. It’s closer than you think and easier to travel to than you might ever imagine. Now, Marketing Manager Grace helps you find out which of the French Polynesia islands is right for you…

Taha’a – The island of charm

Known as the Vanilla Island, Taha’a will whisk you up and away into the traditional, tranquil life of Tahitians. Relax, relax and relax some more on this flower-shaped island surrounded by tiny motus (islets) with bright, white-sand beaches. The air smells so delicious, it’s as if it has been scented with vanilla. 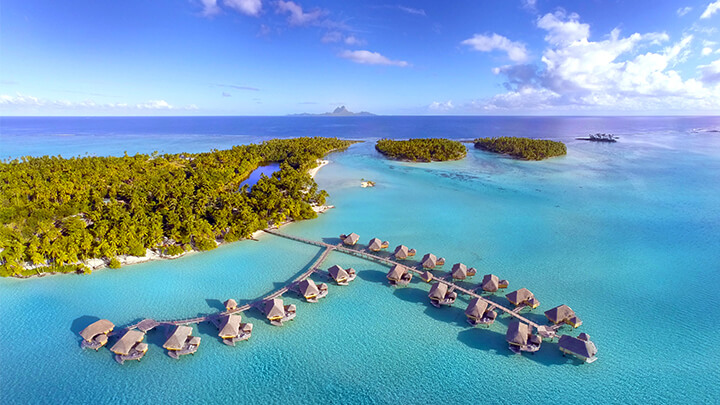 Stay – Le Taha’s Island Resort and Spa. Tucked away on an islet named Motu Tautau in the lagoon’s outer reef, is one of the region’s most exclusive retreats. Be sure to upgrade to a Bora Bora Overwater Suite to catch the sunset views of Bora Bora.

Vahine is home to Vahine Island Resort and Spa, a Polynesian luxury hideaway on its own private island. On this island it’s all about the gourmet food. The talented French chef Valérie offers a Mediterranean twist on classic French cuisine with local influences. A local fisherman arrives each morning with fresh fish from the lagoon and lobsters from a reef nearby. All three meals a day are served in the main restaurant, which oozes a relaxed home-from-home atmosphere. Be sure to try the homemade yoghurt – simply divine! 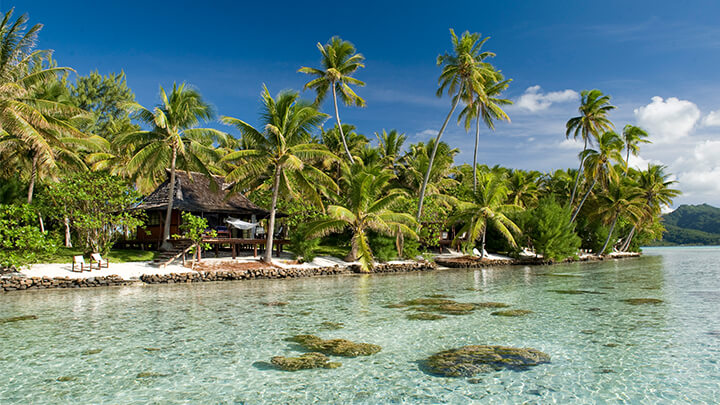 Bora Bora – The island of romance

French Polynesia’s leading lady, Captain Cook named Bora Bora the ‘Pearl of the Pacific’ when he first sighted the island in 1769. The iconic Mount Otemanu is surrounded by turquoise waters and some of the world’s most famous hotels. Bora Bora is one of those places that everyone hopes to visit in their lifetime and once you do, you’ll be longing to return. 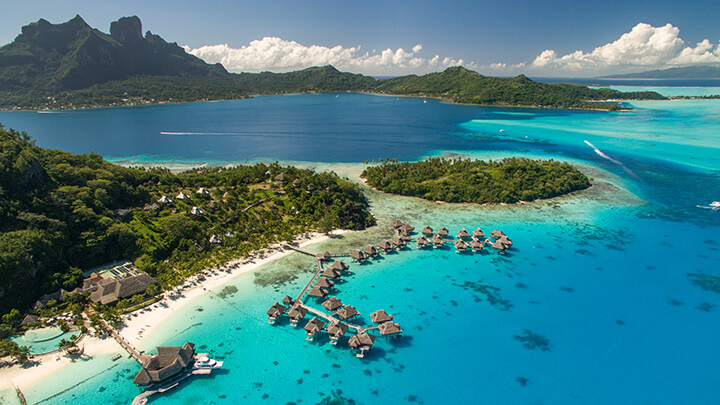 Known as the ‘Garden of Eden’, Huahine is carpeted in lush green vegetation, untamed landscapes and small local villages, while an azure clear lagoon surrounds the two islands it comprises. Connected by a bridge which provides stunning views, the two islands are ringed by indented bays with pristine white-sand beaches.
It’s home to one of the largest and best-known archaeological sites in French Polynesia, the Maeva Marae complex, which you must visit. Other experiences include meeting Faie’s enormous blue-eyed eels and visiting Maroe’s Belvedere lookout for incredible views. Authentic paradise awaits… 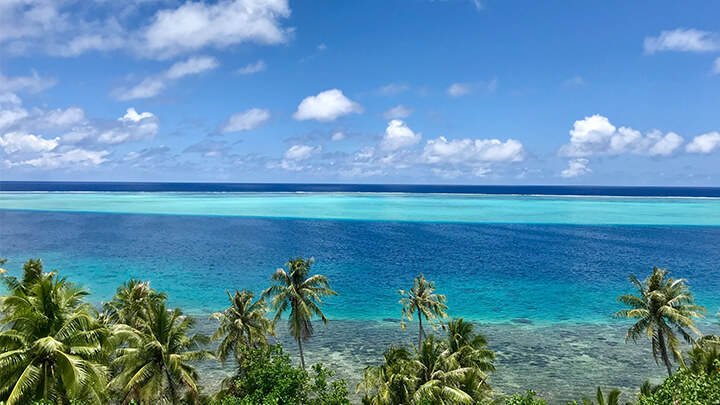 Stay – Hotel Mahana – Located in the heart of Avea’s bay on the west coast of the island. The hotels bungalows offer a true Polynesian experience that you won’t forget.

Located in the Tuamotus, Rangiroa means ‘immense sky’, thanks to the great length of the island – 50 miles from east to west. It’s also the largest atoll in French Polynesia and second largest in the world, with 240 tiny islets making it one of the best dive spots in the world. Whether you explore the lagoon, passes or reefs, you’ll be blown away by the diversity and colours of the marine wildlife. 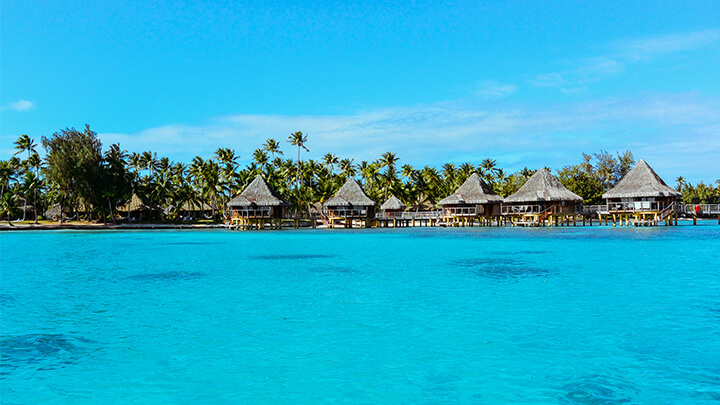 Located in the Tuamotus, Tikehau is considered to be one of the most beautiful atolls in French Polynesia and we couldn’t agree more! With pink sandy islets, coconut plantations galore and hidden alcoves, you’ll feel like you’re finally off-grid here. This tiny coral atoll is the ultimate antidote for modern-day stress. 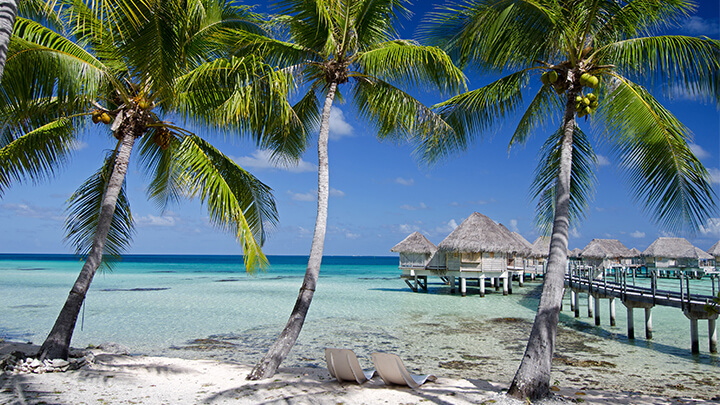 Stay – Hotel Tikehau Pearl Beach Resort. A resort nestled on a pink-sand beach is an intimate hideaway which blends elegance with island chic.

One of the most scenically striking islands in French Polynesia, Moorea possesses a relaxed and welcoming spirit for anyone who visits. With eight volcanic mountain peaks, this island is a geographical marvel. The island is roughly shaped like a heart if you witness it from overhead, a sign your stay here will be magical. 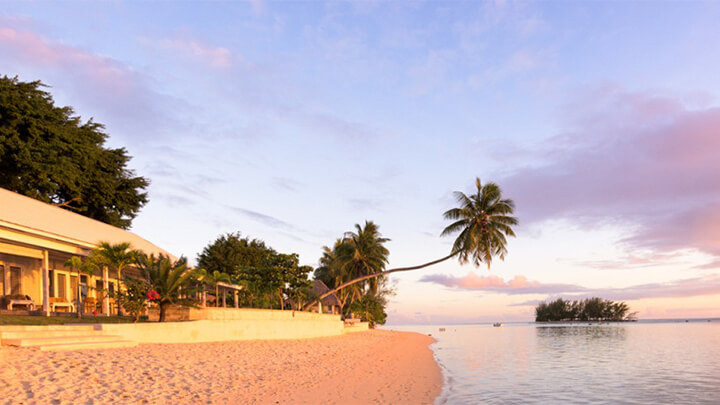 Stay – Moorea Beach Lodge – This little corner of paradise is found along a white sandy beach surrounded by a tropical lush garden on the west side of Moorea.

Tahiti – The Queen of the Pacific

The largest island in French Polynesia is crowned by a circle of majestic peaks, towering over the ocean like a proud queen. Most of the island’s population resides by the beaches and shores, leaving the interior very mountainous with waterfalls and valleys. The capital, Papeete, meaning ‘water basket’, was once a gathering place where people got their water. Now, the capital boasts world-renowned hotels, spas and restaurants. 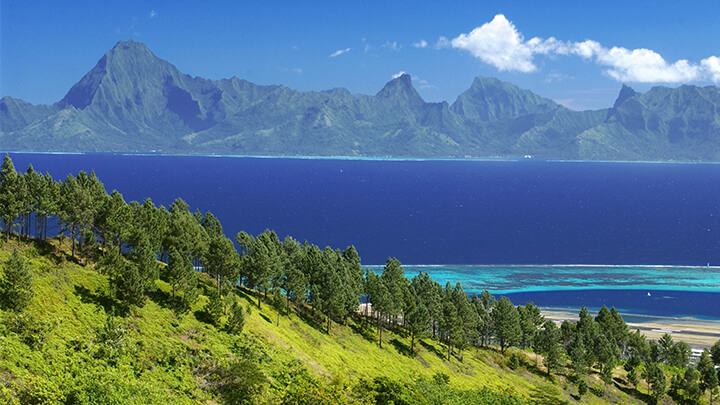 Tetiaroa – A playground for the wealthy

Some places cast a spell on you immediately. They transport you into a world you’ve never experienced before. Somewhere that defines perfection. This is Tetiaroa. A haven for birds, turtles and all kinds of marine life. Tetiaroa is treasured by Tahitians as a sacred place, so much so that many years ago the atoll was only visited by royalty. It doesn’t come as a surprise that Marlon Brando fell under its spell during the filming of Mutiny on the Bounty and his passion for this island gem led him to build the world-class hotel, The Brando. 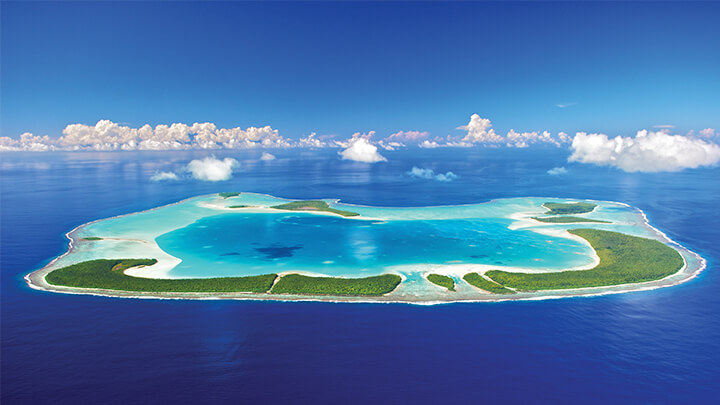 Stay – The Brando. One of the finest hotels in the world, in terms of setting, cuisine and service this really is the crème de la crème!

Are you feeling inspired? Get in touch with one of our South Pacific specialist today!